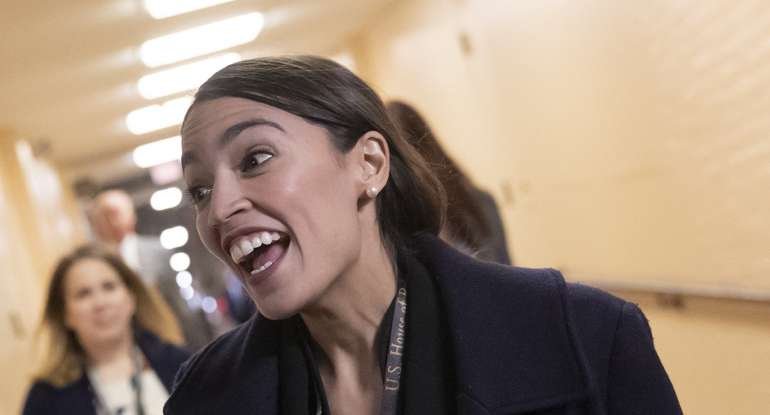 “They had to amend the Constitution of the United States to make sure Roosevelt did not get reelected,” she said at an MSNBC network event last week.

According to AOC, Congress amended the Constitution to prevent FDR from being re-elected:

“They had to amend the Constitution of the United States to make sure Roosevelt dd not get reelected.”

The 22nd amendment limiting all future U.S. Presidents to two-terms was passed by Congress in 1947. However, the idea of limiting the presidency to two terms well-predate the 20th with Congress considering the issue as early as the 18th century.

Historians agree that the 22nd amendment was passed to codify the two-term tradition set by George Washington and adhered to by every president who followed him until FDR, who won a record four terms.

The NCC article points out that the first proposed amendment to create presidential term limits was submitted to Congress in 1788 by Rep. Thomas Tucker — the year after George Washington left office.

Washington’s message was that the president was not a king who ruled for life. A message that has resonated with American lawmakers down through the centuries.

“The National Archives’s “Amending America” project shows that presidential term limit motions appeared in Congress greater than the next 140 years regularly,” wrote Scott Bomboy at the NCC website “with the first possible amendment submitted to Congress in 1788 by Thomas Tucker.  In his 1897 report to the American Historical Association, Herman V. Ames listed 125 versions of presidential term limit amendments proposed to Congress between 1788 and 1896.”

FDR had been dead by then for nearly two years, having died on April 12, 1945, in the first months of his fourth term in office when the 22nd Amendment was passed.

Surprisingly no one in the audience commented on the slip, and video recordings show audience members nodding in agreement that the amendment aimed to curtail the power of the Democrats. In fact, President Truman was explicitly exempted from the two-term limit but, decided not to seek election in 1952. Theodore Roosevelt, who finished President William McKinley’s term after his assassination in 1901, and then won re-election in 1904, did not run in 1908 but did seek what would have technically been a third term in 1912. However, he did so without the consent of the Republican Party. Mounting a third-party effort for the presidency he lost a three-way race to Democrat Woodrow Wilson.

“Interesting that no one in the audience seems to gasp when she makes the error,” wrote David Boaz, the Executive Vice President of The Cato Institute in a tweet following Ocasio-Cortez’s statement.

Interesting that there seems to be no gasp in the audience when she makes that error. https://t.co/hq5ibohCCz

We knew the Democrats let dead people vote. According to @AOC, they can run for President, too. https://t.co/69VBYIDtGT

We knew the Democrats let dead people vote. According to @AOC, they can run for President, too. https://t.co/69VBYIDtGT

Ocasio-Cortez has refused to apologize for the slip, pointing out that Newsweek and the National Constitution Center have seemingly bolstered her obviously false claim – if the sole aim was to block FDR‘s re-election the point was moot in 1945 – by saying that people opposed to FDR, first proposed the amendment. Prior to the amendments’ adoption, Republican presidential candidates in 1940 in 1944 did call for term limits (as had the Democrats in 1912 given ambitions of the another President Roosevelt) by 1947 however the FDR issue was moot as deference to Washington took center stage. The amendment was not ratified by the states until 1951.

Ocasio-Cortez’s knowledge of American history and government structure have been criticized in the past. She notably confused the three branches of the federal government in 2018 with the two chambers of Congress ( the House and Senate).