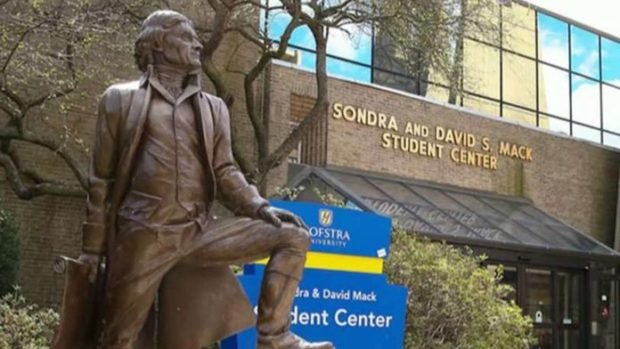 The Snow-Flake students at George Washington University are all aflutter about their school mascot being called the “Colonials”. The first thing that comes to mind in this controversy, given the students’ criticism of our founding fathers, is that it’s obvious that the students consider George Washington and Thomas Jefferson to have been “colonialists” when actually it was England that was the colonizer, and the nation that Washington and Jefferson lived in was the colony. So England’s King George is the one who the students should hate in this stupid debate, and not Washington, Jefferson, nor the cute, comic character the school designed to lead cheers, or whatever its purpose is.

I feel certain that the GWU students don’t realize that the residents of England’s colony in America fought against the concept of colonization, and the students’ opposition to what their protest group pretends to be offended by is why the Declaration of Independence was created and signed by the leaders of the colony, in a bid for their independence from England and their opposition to being a colony.

France, Spain and England formed colonies in North America and throughout the world, so the colony thing was nothing new on the face of the earth. But under the leadership of George Washington and Thomas Jefferson and many others, the new, independent nation of the United States of America was formed from a foreign-run colony and became the most wealthy and free nation the world has ever seen. Today’s very easily offended, well-fed and comfortable students seem to resent that they were born into such wealth that they can attend an exclusive university like George Washington and get a great education. But it also appears that today’s students have no idea how precious a college education is and how blessed they are to be living in America, where they are able to protest the most childish things at the drop of a hat and have their juvenile opinions taken seriously.

In an article published March 7, 2019, by Fox News, author Benno Kass quotes one GWU student who seems to be confusing the meaning of colonialism with the idea of a superior and more advanced civilization replacing a less-advanced one, when she bemoaned the fact that native tribes in North America were replaced by the more scientifically advanced Europeans, and that the ways of the native tribes gave way to the invading Europeans. The whole idea of Darwin’s “survival of the fittest” is what happened with the demise of the Indians in North America.

As happens all over the world, weaker, less advanced populations, and those unable or unwilling to change when faced with a mightier force, will always become losers. And if the student who resents the fact that American Indians lost their land to the European expansion, which led directly to the prosperous society in which this student finds herself today where she is well-fed, housed and clothed, then she needs to hasten her elite education, get a high-paying job, and begin, herself personally, buying up homes and real estate in the Maryland and Virginia area and donating those properties, again at her own expense, to the native tribes who are still established along the East coast, and maybe this will make her feel better about George and Thomas and the marvelous things they did that has assured our pleasant lives in America today.

But I will also hasten to relieve the conscience of this suffering student by reminding her that most American Indian tribes fought each other for land all the time, so what the Europeans did in North American is nothing new on the American, nor the world stage, again referring back to Darwin‘s survival of the fittest. Many of the Indian tribes in North America have become vastly wealthy living on tribal lands where they run their casinos and hotels at a great profit, so it‘s not as though the tribes haven’t received some significant compensation for the suffering of their forebears.

But the opposite of prosperity can also be found in too-numerous, government sponsored tribal reservations where Indian populations live in poverty and lead less than ideal lives. However, liberal college students have to recognize that these unfortunate people are where they are because of American liberal Democrats and their policy of establishing dependent, subservient populations, like those in Democrat sanctuary cities, where people can live on government handouts, stay poor and unhappy, and it’s all due to Democrat, “progressive” policies and Democrats’ constant search for dependant people to vote for them each election day, in exchange for a free meal and a dilapidated place to live.

Opposition Leaders Stopped From Flying to Cambodia to Face Charges —...