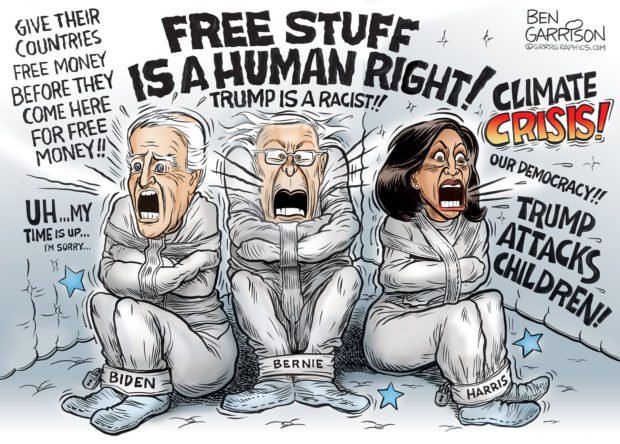 Democrats believe that men have menstrual periods. Democrats believe that men can become pregnant. We’ve heard such idiotic things said by leftists and not one Democrat presidential candidate will go on record denouncing these stupid ideas. This silence from Democrats seeking the highest position in the land should disqualify them for their silence and for thereby pushing these lies on the American people.

Recently in a Democrat debate forum, one of the candidates, Julian Castro, demanded “reproductive justice”, whatever the hell that is, which is an indicator of his mental imbalance, just as the silence of the other candidates proves they are all in agreement in this stupidity.

I’ve read that “reproductive justice” means allowing a transgender female to get an abortion, but since a “transgender female” is really a male who self-identifies as a female, then what does the idiotic phrase mean? After all, abortions are given freely by Planned Parenthood every day, so it’s not the abortion that‘s the problem. But how does a biological male get an abortion, and equally confounding is how he got pregnant in the first place. How does a doctor perform an abortion on a male body, and how was the pregnancy originally discovered?

Radical leftists are a threat to health all over the world. In England with the national health service, if a biological male self-identifies as a female, the government health board will no longer allow him to be tested for prostate disease, because now he’s legally a female. And if a biological female self-identifies as a male, the government will no longer test her for breast cancer nor give her pap smears. So people in England who self-identify as something other than their birth sex/gender, are at a health risk because leftists are pushing this stupidity on the public and denying tests we know are important to the health of the actual biological sex of the individual.

So when American Democrats again take the White House and once again force government healthcare on the nation, the same mindless policies that England has enacted to make self-identity legal and binding and to treat patients only as the sex they identify to be and not as they biologically are, will be forced on American citizens with the disastrous results any thinking person can predict.

We’d better re-elect Trump for a second term, because the Democrat alternative is a danger to us all. GO TRUMP!

Do You Miss Me Yet

Michael Goodwin: Investigating Cuomo – sorry, governor, but here’s why you don’t get to run this probe

Capmocracy - March 1, 2021 0
According to a new Axios-Ipsos poll, more than 60 percent of Americans believe the federal government’s response to the pandemic isn’t helping. In...