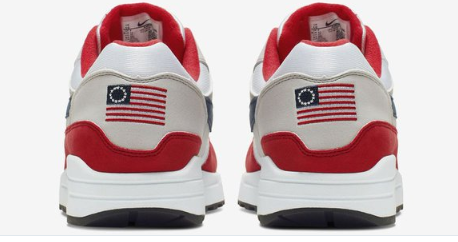 Just Sad. Nike has removed a line of its shoes from public access because one fool, stupid football player says they are offensive to him and not up to his standards and that he can’t endorse them. And my response to his being offended is, So What! To think that a shoe manufacturer will no longer sell shoes that some out-of-work jock doesn’t like is confusing.

Does Nike not want the profit that would come from the sale of the shoes? Do they not care about the buying public and what we want to buy? Do they think that we give a damn what an ex-football player thinks of any particular shoe style?

It seems that this former athlete objected to the American flag on the shoe. If that’s the case, then I support his decision to not support the shoe, but be reminded that this idiot jock would never have to buy the shoes; they would be given to him by Nike, along with the multi-million dollar endorsement fee he would be awarded. So his opinion is quite weak in my opinion.

One would suggest that Nike do two things immediately:
1) Fire Colin Kaepernick as a paid spokesman for the company.
2) Free the Betsy Ross shoes so people who love America can buy these shoes.

Companies like Nike should bury the radical politics inspired by people like Kaepernick and concentrate on making their business more of a success. The governor of Arizona, Doug Ducey, did the right thing when he decided to pull financial incentives from Nike following this political stunt. Americans are sick of seeing their nation abused and insulted with political tricks like this one, and we’d like them stopped.