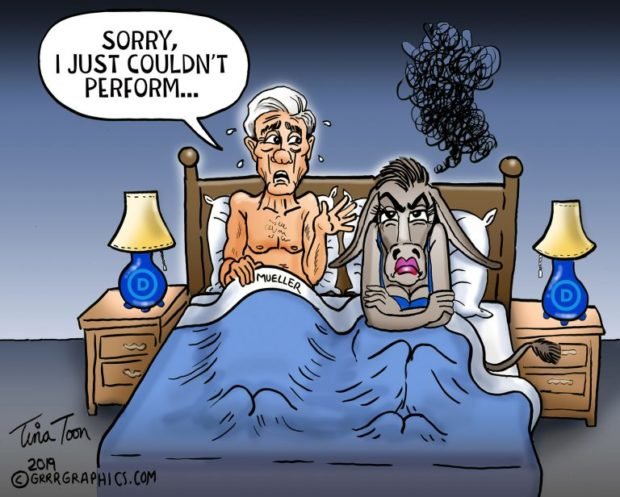 During the Democrat’s hate-Trump show-trial last Wednesday in the House of Representatives, one Republican asked Mr. Mueller about the Steele Dossier and the Fusion GPS aspects of his two-year investigation, and Mr. Mueller very quickly, perhaps a little too quickly and sounding a little too rehearsed, stated that those things were beyond his “purview” during the investigation. In other words, during his investigation he believed he was allowed to look at the 20-year old financial dealings of Paul Manafort, dealings that occurred long before Manafort ever met Donald Trump and concerning things that happened years before Manafort began working for Trump, but he was not allowed to look into critical aspects of the Trump investigation that involved illegal dealings of Hillary Clinton and the Obama administration denying the Trump campaign basic legal and human rights that, until now, were standard operating procedure in the United States of America.

If what Mr. Mueller said was truthful, then his purview was obviously to get the goods on Donald Trump at all cost and at any pain it may cause to ancillary persons associated with Trump or his campaign, and leave Hillary Clinton and her crooked associates-in-crime out of the picture completely. This purview, of course, places a Democrat above the law.

So by Mueller’s own admission, Russia, a nation that Hillary colluded with much more closely that Trump could ever do, and contrary to all claims that the Democrats have advanced for over two years, was not a subject of the investigation; the only objective in the two-year fiasco this nation has been subjected to was the destruction of Trump and any of his associates that Mueller and his vicious investigators could get their legal claws on. Now that’s a “purview” in the tradition of the Democrat party, and that’s a purview that I can believe, because that is exactly how the two-year national embarrassment was conducted, whether Mueller is alert enough to be aware of it or not.

The whole Special Counsel thing was a Washington swamp attempt to get rid of Donald Trump because he actually abides by the constitution and accomplishes things and does what he promises he’ll do, unlike the parading, pompous fools who make up the largest percentage of our national government, who disregard the basic tenants of decency, of our laws and of our constitution.

Life And Death In The Age Of Wuhan

Coronavirus Community Tracing the Key to Get America back to Work

Life And Death In The Age Of Wuhan