Democratic Minnesota Rep. Ilhan Omar filed for divorce Friday, just over a month after she denied that she was separated to a local TV reporter.

Omar sat for an on-camera interview with WCCO reporter Esme Murphy on Aug. 27, who asked “Are you separated from your husband? Are you dating someone?”

Omar replied: “No, I am not. And like I said yesterday, I have no interest in allowing the conversation about my personal life to continue.”

The question came the same day that the wife of Tim Mynett, her campaign consultant, filed for divorce in Washington, D.C., saying that Mynett told her he was having an affair with the congresswoman and was leaving her for Omar.

An anonymous source told the New York Post in early September that Hirsi and Omar had allegedly been living apart since March.

In the interview with Murphy, Omar also declined to answer questions about her brief marriage to another man, Ahmed Nur Said Elmi, which occurred while she already had children with Hirsi and while she continued to live with Hirsi, according to public records.

Murphy did not press Omar on the disparity between records and her statement, saying: “You seem just completely unfazed and unbowed about negative publicity or publicity about your personal life that you don’t want to comment on. How do you do it?”

But Omar has repeatedly deleted evidence about her family.

On Sept. 17, she deleted a 2013 tweet that revealed that her father’s name was Nur Said. That was evidence that she married her brother, since in Somali culture the father’s first name becomes part of the child’s last name.

Omar’s spokesman then released an a statement that raised more questions than answers. It said Nur Said was not actually her father’s name, but rather a nickname that means “Happy Light.”

But her sister listed the name on her marriage certificate as her father’s official name.

An expert told the DCNF that Nur Said is likely a name, not a nickname, and that “Happy Light” is a literal translation of the name in Arabic, while Somalis speak the Somali language.

“Unlikely [it would be] used not as a name,” Shaul M. Gabbay, a former professor of international studies at the University of Denver, told the DCNF.

In 2015, Minnesota blogs began publishing extensive Instagram and Facebook posts by Omar, her family and her alleged family that indicate Ahmed Nur Said is her brother, but the posts were deleted.

The conservative group Judicial Watch filed a complaint with the Office of Congressional Ethics requesting it investigate perjury in her divorce filings with Nur Said, in which she said that he disappeared and could not be located.

She swore that she didn’t know the name of a single member of her husband’s family, and that they didn’t have any friends or acquaintances in common who might know how to locate him, according to papers she filed with the Minnesota district court. She swore she tried to locate him through social media but could not, even though he had public profiles on Twitter, Facebook, and LinkedIn. Screenshots additionally show Omar continuously interacting with him on social media in the years since. Ahmed Nur Said appears to be working for Omar’s sister Sahra Noor, according to Instagram records. 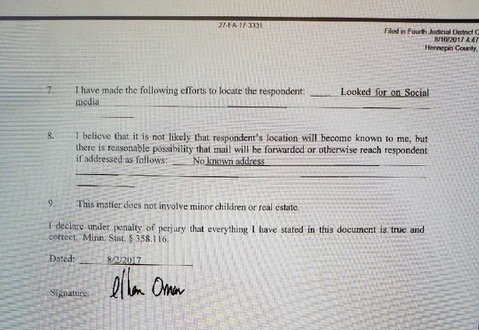 Lying on a sworn form is perjury and each charge carries five years in prison, according to Minnesota law. Questions have been raised about the accuracy of approximately six statements on the sworn form.

Omar was fined by the Minnesota Campaign Finance and Public Disclosure Board for using campaign funds to pay for an accountant to amend her taxes after she filed taxes jointly with Hirsi while she was not married to him (filing joint taxes with a non-spouse is not permitted) and while she was actually married to another man.

Under federal law 26 U.S. Code & 7206.1, “Any person who willfully makes and subscribes any return, statement, or other document, which contains or is verified by a written declaration that it is made under the penalties of perjury, and which he does not believe to be true and correct as to every material matter … shall be guilty of a felony and, upon conviction thereof, shall be fined not more than $100,000 … or imprisoned not more than 3 years, or both, together with the costs of prosecution.”

Trump Was Furious That Cruise Ship Passengers With Coronavirus Were Brought Back to U.S.

Blue Brexit passports, made in Poland, unveiled by UK government

Wells Fargo Agrees to Pay $3 Billion to Resolve Criminal and...