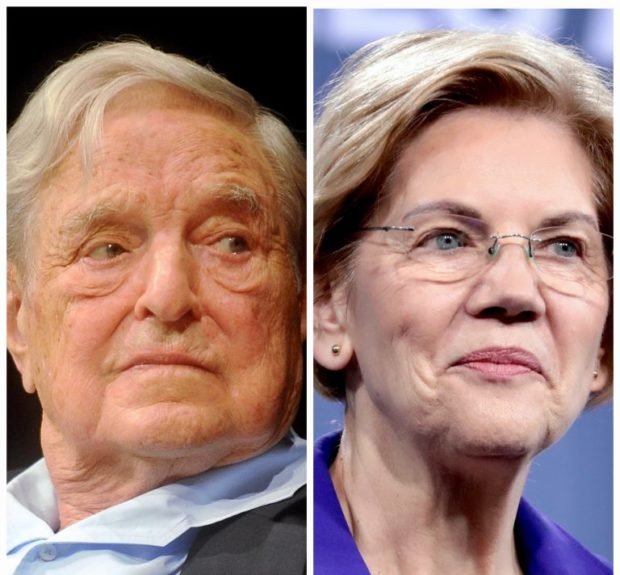 Elite billionaire George Soros announced in a recent interview that 2020 presidential candidate Sen. Elizabeth Warren is “the most qualified to be president.” He called her the prominent person to beat.

He came short of endorsing her because he wants to work with whoever wins the primary election. This Jewish mega-donor to the Democrat Party has been a roadblock when it comes to conservative and nationalistic rules of law in the U.S. A staunch critic of President Trump and Republicans, Soros has openly predicted that Trump will lose 2020.

Billionaire George Soros has his sticky little fingers in our political affairs…. Declaring in a newly-released interview that 2020 contender Elizabeth Warren is “the most qualified to be president.” What’s YOUR response to Soros? 👈 https://t.co/SIdXoOzSG3

Soros has long been a meddler in American politics. The 89-year-old Hungarian has used his massive fortune to promote leftwing politicians, influence media, and build up liberal organizations. In October, he said that his lifelong mission of establishing socialism in the United States is still taking place. Despite Soros’ best efforts, socialistic infiltration has been held back by President Trump and his voters who value freedom. Soros has long been adamantly tied to open borders agendas and has paid to try and hinder Trump’s immigration plan.

The election of President Trump and the open-ended Brexit debate happening in Europe has hindered Soros’ power. However, his reign of establishing open societies is still growing, and he is trying to do damage control.

“I have to admit that the tide has turned against me, but I don’t think that I have failed,” Soros said.

One of the media channels that Soros has in his back pocket is National Public Radio (NPR). In 2011, he gave this tax-payer funded media outlet $1.8 million. NPR has portrayed Soros as being an innocent philanthropist who wants nothing more than to promote democracy.

In 2016, Soros gave generous donations to Hillary Clinton’s campaign. Records show that this wealthy elite was one of her top 10 donors and provided a staggering $10.6 million to her campaign. He is making it known that his biggest priority now is keeping Trump out of the White House in 2020. He pushes the left’s favorite mantra of unfair election interference and wanting to fight voter suppression. Trump endangers fair elections, according to Soros.

His many admirers and financial beneficiaries also include Barack Obama, Nancy Pelosi, and several of the 2020 candidates. The irony is that all of these top politicians have continually advocated for the elimination of big political money and the corrupt influence that brings. Of course, according to them, this is only a Republican Party issue. Soros is a prime example of the big money influencers that top Democrats claim they want to end.

As stated above, the beneficiary who happens to be a former president, Barak Obama, is set to headline a fundraiser at George Soros’s son’s house. The other two featured guest is former Attorney General Eric Holder and former Virginia Governor Terry McAuliffe. Alex Soros will be hosting the fundraiser to acquire funds for the National Democrat Redistricting Committee (NDRC). 34-year-old Alexander Soros is known for his playboy lifestyle and is in line to inherit $24 billion.

Elizabeth Warren has emerged from the pack and has even surpassed her biggest competitor Joe Biden. Perhaps her biggest platform she is campaigning on is to enact a plan for every problem and have the government fix it. The price tag for such an ordeal is tens of trillions. Her policy on how to pay for this is to hike taxes drastically. Anyone with common sense and minimal knowledge in economics knows that this is not possible with higher taxes alone.

Due to her massive embrace of socialism, Warren is the perfect candidate for Soros. She embraces Medicare for All but has refused to concede out loud that it would increase middle-class taxes. She does out rightly state that takes hikes on the wealthy and high earners will happen. A wealth tax is being purposed by her that will supposedly take in trillions of dollars over ten years.

Wealth tax creates barriers for success, entrepreneurship, and innovation. In turn, the economy has no chance to stay healthy and thriving. Looking at European countries that embrace wealth tax, their average percentage of GDP in revenues is 0.2. When looking at the U.S. federal income tax, it raises 8% of GDP in this nation. The comparison helps to show the significance of the devastating effects just one of Warren’s plans would create.

Throughout her political career, Warren has spent much of her time and energy accusing Wall Street as being all that is wrong with American capitalism. Despite this, several Democrats in Wall Street have plans to financially support her as a candidate if she secures the Democratic nominee for president. This information was obtained by people inside Warren’s inner circle who have discussed this with Wall Street executives.

I’m fighting for an economy and a government that works for all of us, not just the wealthy and well-connected. I’m not afraid of anonymous quotes, and wealthy donors don’t get to buy this process. I won’t back down from fighting for the big, structural change we need. https://t.co/nx7GczQhHl

It is theorized that Warren will tune down the level of viciousness when it comes to her anti-business stance. Through this, she hopes to garnish more significant business support in the General Election. Trump is well-financed from himself and his supporters, so some of the other candidates are having to switch things up to gain financial support.

“She has to accept money from the finance business in the general election because if she doesn’t, it will be impossible for her to win,” said a Democrat Party fundraiser.

Her extremist views have put her in the progressive category along with her competitor Bernie Sanders. Based on records retrieved, Warren has raised $60 million so far, while Sanders has passed her with raising $73 million. While this seems like an enormous amount of money, it is going to take around $1 billion more in funds to be competitive with Trump’s campaign.

The Trump campaign has raised over $700 million so far.

There’s no doubt in my mind, despite Democrats’ best corrupt efforts, there will be a #TRUMP2020Landside!

President Trump has well exceeded all over candidates bringing in a mind-boggling $700 million thus far. It is projected that due to Warren’s past harsh remarks, many in Wall Street are going to be in support of Trump’s 2020 election. Projections show that Trump is expected to raise more than $1.5 if the current pace of donations and fundraisers continues steadily.

Elizbeth Warren has a big-money player on her side. While this is quite helpful, President Trump has the American people on his side. With the 2020 election underway, the battle between the left and right is only heating up.

Originally published at Patriots of the Lord.

Capmocracy - November 23, 2020 0
Mino had a bunch of collaboration in his 2nd album Take like BeWhy, Zion.T, Meenoi and also the comeback of the duo MOBB. They...
Healthcare

Capmocracy - November 23, 2020 0
State and local officials nationwide are imposing new coronavirus restrictions and pleading with the public in an increasingly desperate attempt to stop the...
Asia

Elderly Mother of North Korean Official Dies After He Kicks Her...

Capmocracy - November 23, 2020 0
Citizens in North Korea are angry that authorities have not punished a local official for the death...