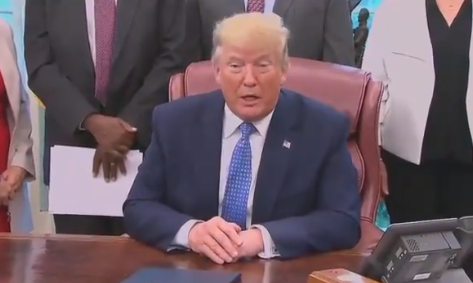 Since Day One the impeachment hearings were never must-see TV. Sure, it was interesting and substantive at times, which would be complimented if this were some sort of graduate school seminar about the lonely lives and confusing experiences of far-flung diplomats.

The hearings were designed to make you feel sympathy for the witnesses and to stand mortified as they described how Donald Trump allegedly treated them.

This was supposed to be a congressional hearing to determine whether to file charges against and the ultimate removal of a sitting president of the United States. By that standard, the Adam Schiff clown show was a flop. Not a single witness had first-hand knowledge of the call.

What were they even doing there? Everything they said would be “hearsay” in a real court of law.  No, all these hearings are designed to do– humiliate Donald Trump. However, his approval rating keeps rising. So much for that plan.

When Schiff wasn’t lying about something, he was restricting the GOP’s questions. What kind of hearing did we just watch?

Most would call it an absolute flop, except that, would suggest a sense of drama the day never produced. A five-hour slog that doesn’t hit pay dirt or end up anywhere meaningful can’t be sensational.

The Schiff clown show was more of a quiet disaster. Imagine watching paint dry and you’ll get the picture. Still, the impact is significant. At the start of the day, impeachment was a one-party fever, and so it remains.

Nothing that happened Wednesday changes that critical dynamic. At this point, time and the public’s tolerance are not the impeachers’ friends.

“If Democrats think they advanced their case for impeachment with the first day of hearings into the Ukraine matter, they are deluding themselves. The proceedings were confusing, not clarifying.

Speaking as someone who has followed this matter in granular detail, I found it extremely difficult to tease out the set of undeniable facts that would prove Donald Trump did something so appalling, he should be the first president in history to be removed from ­office and only the third to be impeached. And I ­assure you, I am willing to be convinced.”

In the second hearing, the question remains: was Trump unfair to our ambassador to Ukraine in relieving her of her duties? The Democrats make it seem that he was — but firing her was his right under the Constitution and it’s unquestionable. Did he use people outside the ordinary chain of authority to give him advice on Ukraine and help him make policy? He did — but, once again, it was his right under the Constitution.

What Adam Schiff wasn’t expecting was Trump planned on releasing the official call transcript during the show. Yet, the mainstream media remained silent.

I am wondering if someone even thought to bring up how grotesquely Obama treated the Ukrainians. Where was the outrage machine then? The leftist media and talking heads were too busy praising him to bring up his controversies. But, at least Trump delivered defense weapons instead of giving them blankets as the Obama administration did.

What good would blanket be to Ukraine as they are being attacked by Russia? President Trump has done 100% more for Ukraine than Obama ever did.  So, ask yourself this, why is Trump being considered for impeachment when he went well over what he was expected to do?

The “Soul of the Nation” is on the Ballot

Capmocracy - October 31, 2020 0
New Jersey Gov. Phil Murphy said Friday that “all options are on the table,” including another lockdown, amid a spike in coronavirus cases in the state,...