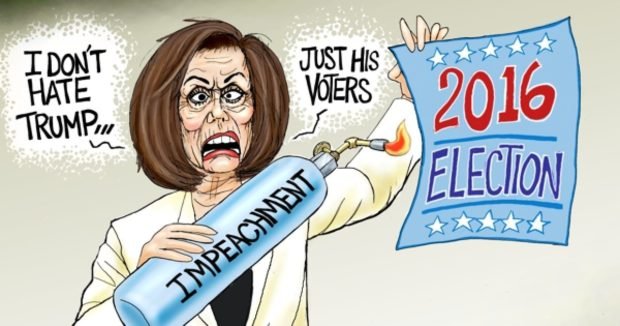 We have confirmation that another Democrat will vote against the sham impeachment effort being pushed by far-left extremists in Congress.

During an appearance Saturday before dairy producers in west central Minnesota, Rep. Collin Peterson said unless he hears something to change his mind, he will not vote to impeach President Trump on Wednesday.

This comes shortly after a New Jersey Democrat made an even stronger anti-impeachment move by reportedly deciding to switch to the Republican party and an Oklahoma Democrat was faced with constituents voicing anti-impeachment sentiment in far greater numbers than those pushing for impeachment.

So what’s at the heart of the deluge of stories where Democrats are either abandoning their failing party or where the constituents are telling them that a vote for impeachment will end their careers?

While CNN spins tails that no one believes and only those trapped in airports see, the rest of America gets facts by reading the news on several outlets and judging for themselves what has been dutifully investigated and what is simply partisan tripe.

Capmocracy - June 18, 2021 0
Jack Ma, co-founder and executive chairman of Alibaba Group, waits before a meeting of Russian President Vladimir Putin with representatives of the foreign...
video

Infant Dead After Kidnapper Has Shootout With Police