Sports was much more enjoyable when reporters covered sports. Now print and broadcast coverage is cluttered with breathless opinionating regarding race, ‘gender’, inequality and which high school will next host barnstorming Colin Kaepernick’s Aerial Circus. 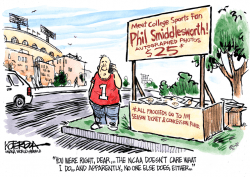 The latest social justice crusade for the sporties is what Sally Jenkins terms the NCAA’s “economically preying on athletes rather protecting them.”

This doesn’t mean the NCAA is forcing scholarship athletes to pay for housekeeping in away stadium locker rooms. It means the NCAA is using player’s images to promote college football without paying the athletes. The NCAA also stifles individual initiative by forbidding the athletes from cashing in on their reputation while they are still playing in college.

Or as Jenkins with high umbrage terms it, “NCAA denies athletes their natural economic rights, and hijacks their names, images and likenesses for financial gain. Ohio State’s Chase Young is a star who may not sign his own autograph for money or endorse a Columbus car dealership.”

She then pulls out an apples–to–oranges comparison that supposedly wins the debate, “What member of a university marching band is told that they must not profit from the trumpet so long as they’re at the university?”

The answer right now is none, but when the Pride of Oklahoma starts recruiting trumpet players like the football team recruits the next Baker Mayfield, we’ll have to revisit the trumpet’s last call.

Fact is the football players Jenkins is putting up for auto dealer adoption are already being paid. In 2011 Dr. Patrick Rishe – at the time an Associate Professor of Economics at Webster University – ran the numbers on the value of a football scholarship.

At the University of Oklahoma, the out–of–state scholarship value was $124,556. And that’s not all, “intangible benefits associated with the scholarship [include] free gear, free publicity, free high-quality training and coaching, free access to trainers and fitness centers [and] lower unemployment rates for college graduates.”

Plus, the relief of avoiding the ball–and–chain of student loan debt.

Rishe concludes, “adding the short-term cost savings to the long-term earnings enhancement, the value of a college football scholarship at the Top 25 schools is potentially as high as $2.2 million for those student-athletes that complete their degrees.”

Those were 2011 numbers. The total value would be higher now.

The players, whose pain SJW sports writers are feeling, represent maybe three percent of all the scholarship players on a team. Clemson QB Trevor Lawrence might cash in by endorsing hair salons but the vast majority of the team would remain anonymous and uncompensated.

And if you think the college football and basketball recruiting process is sleazy now, wait until boosters can bid for 5–star recruits! The players may as well list themselves on Ebay during their last semester of high school.

John Feinstein, another player pay supporter, does make an interesting point. Non–revenue or minor sport athletes, usually also–rans for collegiate attention, could benefit handsomely. “Why not pay a star swimmer, soccer player, tennis player or golfer to put on clinics for local kids? When Oklahoma State wins the NCAA golf championship, maybe local businesses around the state might want to use some of their players to promote products — or their golf courses.”

California just passed the “Fair Pay to Play Act” that will allow in–state athletes to go on the auction block. Other states are checking with head coaches who have winning records to discuss feasibility. While a miscellaneous congressman wants to strip the NCAA of its tax–exempt status if it doesn’t surrender.

Jenkins is convinced the NCAA is doomed because a political consultant told her so, “once the public suspects an organization’s motives don’t align with its mission, ‘we often see a rapid decline in the public seeing that organization as indispensable.’”

Maybe if Jenkins had been a paying client she would’ve been told the rest. Individuals often despise an organization overall, say Congress, but heartily approve of their individual congressman. The same is true of the NCAA and universities.

The situation may not be perfect, but players on a football team currently enjoy a rough equality. Some are more famous than others, but they all labor under the same economic system. And they are all getting more compensation than the rest of the student body.

Players are only undercompensated when compared to the NFL, which most of them will never join.

What Jenkins is advocating will replace this equivalence with a permanent caste system that geometrically enhances the inequality the left purports to abhor.

Think California, only in cleats.

Chase Young, Jenkins’ pet, will be making buckets of money, while the lineman next to him continues to labor in obscurity and now relative penury. It’s a recipe for jealousy, dissention and team disintegration.

The Left’s Blueprint of Unity

Tucker Carlson: Democrats pushing unity through domination of their opponents

Beijing Biden: Who Benefits the Most From Joe Biden’s Plan?