A surprising development is occurring among staunch members of the left at the Washington Post and elsewhere. These woke scolds have come out strongly against sanctuary cities and counties. Before it was either silence or tacit approval for government sheltering a population that was “in the shadows,” which makes sense when you remember they’re running from the law. 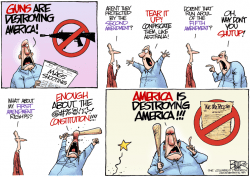 Sanctuary jurisdictions serve to protect a criminal class estimated to be 22 million strong at the expense of law–abiding citizens.

And what an expense it is.

These serial law breakers are responsible for the deaths of approximately 3,000 American citizens every year. Over the course of an average lifetime, the total cost to taxpayers for supporting people who have no right to be in our country is estimated by Center for Immigration Studies to be $746.3 billion.

And even those figures don’t include the cost to individual citizens of identity theft, property crime, lowered property values, assault, gang activity, crowded schools, packed emergency rooms and ‘Press One for English.’

The WoePost referred to sanctuary movement as “disturbing,” “reactionary,” “ugly,” and “dangerous.” Sanctuaries were even compared to “slavery” which makes perfect sense when you recall the idea behind sanctuaries is to protect cheap, controllable labor for unscrupulous employers.

Only I need to clarify. The WoePost wasn’t condemning sanctuaries that protect illegal aliens from richly deserved punishment. It was condemning the new 2nd Amendment sanctuaries protecting the constitutional rights of law–abiding citizens from undeserved collective punishment.

That’s because the extra–legal selective law enforcement the left uses to protect people who have no right to be here is out of bounds for citizens to use to protect rights granted them at the founding of the nation.

And that’s not the only contrast. Illegal alien sanctuaries are imposed on an electorate from the top down to protect a pool of future leftist voters. The 2nd Amendment sanctuary movement is a grassroots effort that petitioned elected officials to protect constitutional rights and the officials responded.

Even the WoePost admits the “movement has driven throngs of people to show up at boards of supervisor’s meetings. Their numbers are remarkable — 400, 800, even 2,000 in attendance.” As this is written over 110 Virginia counties, cities and towns have passed some form of 2nd Amendment sanctuary resolution that says that jurisdiction will not enforce or impose unconstitutional gun ownership restrictions on its residents.

Gun Owners of America Senior Vice President Erich Pratt has one of the best explanations of the 2nd Amendment sanctuary movement, “Sanctuary resolutions are important because they provide the best way for local officials to inform the newly elected General Assembly and the governor that if they rush forward to create new felony crimes to jail law-abiding Virginians — just for exercising their most fundamental and natural right of self-defense — then they cannot expect localities to enforce such unjust laws.”

Gun owners are right to be concerned. This isn’t the anodyne “common sense gun regulation” that is so innocent during the campaign. It’s always different after they win.

Richmond is now controlled by the angry left. Gov. Ralph ‘Coonman’ Northam has discussed requiring all owners of so–called ‘assault rifles’ to register their weapons with the state. And he requested an increase in the prison budget to cover the “increase in the operating cost of adult correctional facilities resulting from the enactment” of gun grabbing laws.

When gun confiscation speculation was running rampant in Richmond, US Rep. Don McEachin suggested the governor call out the National Guard to confiscate weapons.

Del. Dan Helmer introduced a bill that would ban indoor shooting ranges in buildings with more than 50 employees. Ranges that survived would be required to keep an Orwellian log of each shooter’s name, address and phone number.

Presumably so the state police could call ahead and have the owner pack his weapons for faster confiscation.

Del. Mark Levine’s bill would confiscate any magazine that held more than 10 rounds of ammunition. Those who didn’t turn their property over would be felons.

And that’s just the beginning.

There’s nothing “common sense” about these precursors to confiscation, which is the end game for the left. These despicable people subvert the law to protect their protected class of illegal aliens and future Democrats while using the law as a club to punish gun owners who vote Republican.

David French hit the nail on the head when he described the left’s gun fixation, “All too often gun-control proposals operate as a form of collective punishment on the law-abiding while serving as barely a speed bump in the path of the criminal.”