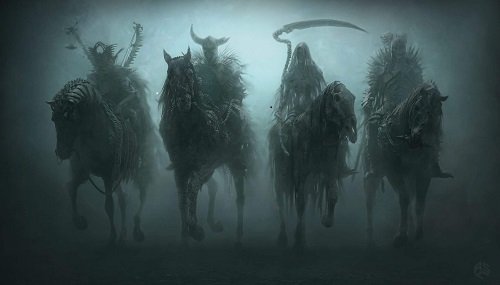 The four horsemen of the media/democrat party apocalypse ride stealthily into the homes of 25 million Americans each night with subterfuge powering their steeds.  We know them by their names: ABC, NBC, CBS and CNN, and by their misdeeds, lies, deceit, activism, and indoctrination.

The most insidious of their powers is the tactic of lying by omission to protect democrat party candidates and their ideological narratives.  The most recent example of this well-honed skill all four of the horsemen possess is their deafening silence surrounding Project Veritas’ recording of a Bernie Sander’s campaign field organizer praising Soviet Era gulags, saying, “Actually, the Gulags were a lot better than the like the CIA has told us,” Jurek said. “Like people were actually paid a living wage in the Gulags, they had conjugal visits in the Gulags. Gulags were actually meant for reeducation.”  After romanticizing Gulags, Mr. Jurek advocated for the beating of cops, putting people in reeducation camps if they “pushed back against the revolution”, and last but not least, “If Bernie doesn’t get the nomination or it goes to a second round at the DNC convention, f**king Milwaukee will burn.” Jurek told Project Veritas that there were many others in the campaign that shared his views.

This is incendiary language from an official of a major Democrat party candidate and mainstream news outlets have decided to tell as few people as possible about it because truth be told, most of the democrat party candidates share many of Bernie’s socialist leanings, beliefs and policy positions. Mainstream network news simply doesn’t want viewers to recognize this similarity between the democrat candidates and arriving at the conclusion that it attracts Kyle Jurek types to all the campaigns.

As crazy as Kyle Jurek sounds in this recording, is the spirit of what he’s saying much different than many democrats in congress and media?

Here’s Maxine Waters inciting a crowd in 2018:  “If you see anybody from that Cabinet (Trump’s) in a restaurant, in a department store, at a gasoline station, you get out and you create a crowd and you push back on them, and you tell them they’re not welcome anymore, anywhere.” It seems Maxine is employing her version of Kyle Jurek’s punishment against those who, as Kyle said, “are pushing back against the revolution”.  Maxine’s re-education camp is one of social isolation and denial of access to “anywhere” and telling people to “create a crowd” is to make sure it gets done.  I wonder Maxine daydreams of chasing down Trump supporters wearing an Antifa mask and wielding a club while screaming, “take that! You FASCIST!” And make no mistake, just like the dullards in Antifa, she would not recognize the irony of calling people fascists as she beats them for political disagreement.

Elizabeth Warren shares Jurek’s animosity of the police when she tweeted, “5 years ago Michael Brown was murdered by a white police officer in Ferguson, Missouri. Michael was unarmed yet he was shot 6 times. I stand with activists and organizers who continue the fight for justice for Michael. We must confront systemic racism and police violence head-on.”  Kamala Harris decided she too would ignore the real facts in the case when she said, “Michael Brown’s murder forever changed Ferguson and America. His tragic death sparked a desperately needed conversation and a nationwide movement. We must fight for stronger accountability and racial equity in our justice system.”

Both women utterly disregarded Barrack Obama’s justice department finding that “Officer Darren Wilson most likely had reason to fear for his life and did not break the law when shooting Brown.”

Just like Kyle Jurek, Maxine Waters, Elizabeth Warren, Kamala Harris and a litany of other democrat politicians, continuously work to undermine our institutions on false grounds.  These instances of politicians acting irresponsibly with their words and actions are endemic and the Media complex in this country are co-conspirators.