Consumer knowledge is consumer power. That is why hospitals fight tooth–and–toenail against any efforts to post turnkey prices for medical procedures. 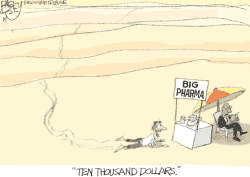 Hospitals want to maintain price opacity. If you ask a hospital what it costs to have your appendix removed you get one of three replies: Uproarious, table–pounding laughter. Thinly veiled contempt at such an ignorant question. Or dead silence.

Fortunately, the Information Iron Curtain has been under assault by at least three local efforts.

The Dallas Morning News reports Crystal Roberts was rushed to an emergency room after a car crash. Fortunately, she was home in only three hours. Unfortunately, lacking insurance, she was billed at the ‘This Is Gonna Hurt’ rate and charged $11,037 for procedures that didn’t require hospitalization.

This exemplifies the greed and sadism that typifies hospital administrators. They attempt to charge the highest prices to people who have already demonstrated they are either broke or idiots because they don’t have health insurance in the first place.

Crystal found a personal injury lawyer working on commission and sued the hospital. The state supreme court, bless its heart, ruled if the hospital intends to prove its $11,000 walletectomy is “reasonable” it must “share … details about the discounted rates it had with health insurers.”

That’s real progress, but the danger is the rats will see their hospital ship is sinking and settle out of court without releasing the prices.

The Maryland Health Care Commission is our second example. It published a limited list of turnkey prices for medical procedures. Limited because the prices cover operations on women or the elderly or elderly women. But it’s a start. The numbers cover 21 different hospitals in the state and along with prices the percentages of medical errors are also posted.

Donna Ferguson had a knee–replacement done in Mexico by a surgeon from the Mayo Clinic. You’re no doubt thinking, yeah Mexico this year but it’ll be Somalia in 2020 if greedy capitalists can save a dime. Our suspicion is misplaced. Donna had the option of staying in Mississippi. What made the difference was the $5,000 check she received from her employer for agreeing to the lower–priced package.

They sued to block implementation. That’s because if it were up to hospital administrators, patients wouldn’t be able to find out what it cost to park until they tried to exit the parking garage.

The New York Times explains, “The nation’s hospital groups sued the Trump administration over a new federal rule that would require them to disclose the discounted prices they give insurers for all sorts of procedures.” Including the cash price it will accept from individual patients.

It’s interesting that while hospitals have no compunction about forcing Crystal to hold bake sales to make the monthly payment on her hospital bill, the effort involved in publishing price information would bring the friendly folks in hospital billing to their knees. “’The sheer volume of data that the government is proposing health plans disclose is staggering — dollar amounts for every single item or service, for every single provider and facility, for every single individual and employer plan,’ wrote executives from America’s Health Insurance Plans and the Blue Cross Blue Shield Association.”

If that’s really the case, how do hospitals calculate the bill? Is it by taking the total overhead and anticipated profit for the month and divide it by the number of procedures? Or does the information already exist and they are simply lying through their lawyers?

Hospital price transparency has been one of the few sustained efforts on behalf of normal people from the Trump administration.

This fight is too important to leave to lawyers and judges. Consumers need to be heard. Call your congressman and tell him you support the Hospital Price Transparency Rule. And send an email to the Department of Human Services in support, too.

If consumers don’t make their voice heard you can be sure the vacuum will be filled by the blandishments of hospital lobbyists.