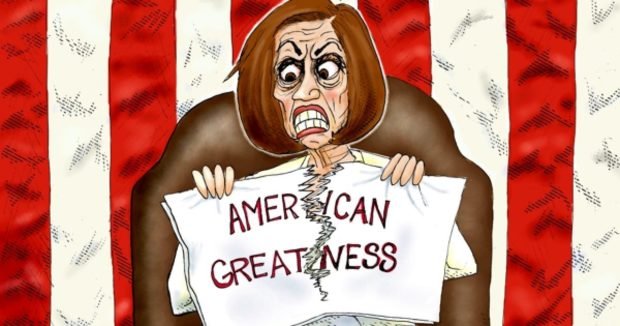 Topics in this post: Democrats State of the Union

No sensible person can doubt that Democrats have been tearing up the fabric of America for many years with their unconstitutional healthcare take-over, their sexual self-identity farce, their calling everyone that disagrees with them racists, their open border immigration policy, their sanctuary city idiocy, their insistence that men can have babies, and other really stupid ideas. But following the State Of The Union speech last Tuesday, Nancy Pelosi establish a new level of Democrat destruction of a free and prosperous America by tearing up the official House of Representatives copy of the president’s SOTU speech, which President Trump dutifully handed to her prior to the beginning of the speech. With this evidence and knowledge in our possession, we can be certain that the constitution, always a suspicious and threatening document to the Democrats, due to its limitations on the powers of government, will be next document for official destruction.

To Democrats the shredding of President Trump’s State Of The Union speech is merely symbolic of their disdain for the president in particular and the “deplorable” people who voted for him in general. But to any thinking American, the destruction being done by Democrats to our constitution is game-changing and dangerous, and Democrats must be defeated at the ballot box in November or they’ll actually perform the constitutional destruction that so far they’ve just been talking about.