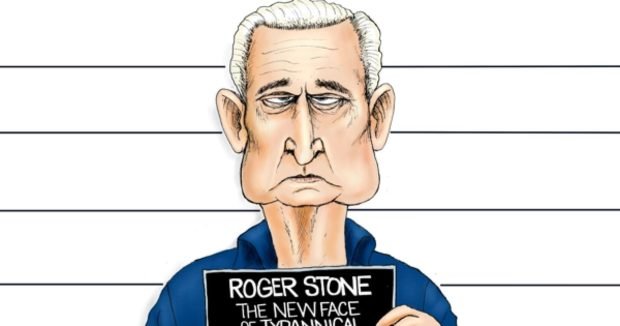 Federal prosecutors in Washington, D.C. revised a sentencing recommendation for Roger Stone on Tuesday, saying that the longtime Trump confidante deserves a prison sentence “far less” than the 87-108 month recommendation submitted on Monday.

Prosecutors said in the new filing that the previous recommendation was “excessive,” and more in line with cases involving violent offenses rather than the obstruction charges that Stone faced.

“The prior filing submitted by the United States on February 10, 2020 does not accurately reflect the Department of Justice’s position on what would be a reasonable sentence in this matter,” wrote John Crabb, Jr., an Assistant U.S. Attorney for Washington, D.C.

“While it remains the position of the United States that a sentence of incarceration is warranted here, the government respectfully submits that the range of 87 to 108 months presented as the applicable advisory Guidelines range would not be appropriate or serve the interests of justice in this case.”

The revised filing was submitted after a tumultuous day in the Stone case. Three prosecutors who worked on the case withdrew from the proceedings after a Justice Department official signaled that top brass was unhappy with the hefty prison recommendation.

Earlier on Tuesday, President Trump voiced his displeasure with the initial recommendation, which he called a “miscarriage of justice.”

The main difference in the two sentencing recommendations deals with how prosecutors want to handle a witness tampering charge against Stone.

Stone was convicted on Nov. 15 on five false statements charges, an obstruction charge, and a witness tampering charge, all related to his interactions with the House Intelligence Committee during its Russia investigation.

Prosecutors alleged that Stone threatened a longtime associate, Randy Credico, in order to prevent him from cooperating with the House investigation or the special counsel’s probe.

At Stone’s trial, prosecutors pointed to an April 2018 message in which Stone told Credico, “Prepare to die, cocksucker.”

Stone also told Credico, who he has worked with since 2002, that he would take his dog.

In their initial filing, prosecutors asserted that Stone’s threats warranted an eight-level enhancement to his sentence, which would significantly increase his recommended prison term.

But prosecutors appear to have reversed their thinking about the enhancements in the newest filing.

Prosecutors said that while the enhancements were “perhaps technically applicable,” they “disproportionately” increased Stone’s offense level to one usually seen in crimes involving violent crimes like armed robbery.

Prosecutors said that if the enhancement for threatening Credico was not added on to Stone’s sentence, he would have received a recommendation of between 37 and 46 months in prison.

“Accordingly, it would be reasonable for the Court to conclude that the Guidelines range as calculated is unduly high on the facts of this case.”

Stone has long insisted that his threat was not a serious one. He’s said that he and Credico have been on-and-off friends for years, and often trash-talked each other.

While Credico claimed in media interviews in 2018 that he felt threatened by Stone, he testified at Stone’s trial that he did not take the messages seriously and never felt that he was in physical danger.

Credico wrote to Judge Amy Berman Jackson on Jan. 20 pleading for no jail time for Stone.

In their filing Monday, prosecutors acknowledged but dismissed Credico’s letter to Jackson. In Tuesday’s filing, they cited Credico’s plea for leniency in their argument for a lighter sentence for Stone.

“[T]he most serious sentencing enhancement in this case…has been disputed by the victim of that threat, Randy Credico, who asserts that he did not perceive a genuine threat from the defendant but rather stated that ‘I never in any way felt that Stone himself posed a direct physical threat to me or my dog,’” the filing says.

“While Mr. Credico’s subjective beliefs are not dispositive as to this enhancement, the Court may consider them when assessing the impact of applying the enhancement – particularly given the significant impact that the enhancement has on the defendant’s total Guidelines range.”

The filing cited two cases where an eight level enhancement was imposed. In one case, a defendant involving in a gang war gave the “green light” to two gang members to “smash” a cooperating witness. In another case, a defendant was slapped with an eight-level enhancement after he “threatened to rape and kill the wife of a cooperating witness in a drug distribution conspiracy prosecution.”

Annual March For Life Canceled In Person, But It’s Only Partly Due To Coronavirus