Three years into the Trump administration seemed like a good time to evaluate progress on the number one issue for Trump voters: Illegal immigration. Unfortunately progress is nil.

There is no wall and no one is paying for it. 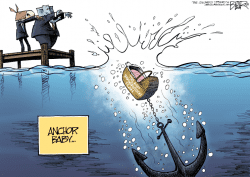 There is no ‘deportation force’ and Trump hasn’t even made a dent in the 22 million illegals already in the USA.

Sanctuary cities, counties and states are going strong and suffering no penalty for entering into a conspiracy to obstruct justice and undermine the rule of law.

There is no tax on remittances sent by illegals here to their relatives in their home countries.

There is no nationwide requirement for the use of E–Verify in hiring.

There were even 300,000 anchor babies born to foreigners either just stopping in for a visit or hiding in the shadows.

In case you’re not up to speed on immigration loopholes that always work to benefit outsiders and never citizens, anchor babies are the GPS theory of national allegiance.

Let’s say your pregnant wife was sitting in the stands at Lambeau Field and she got so excited she gave birth. The resulting baby would not be entitled to Packers season tickets for the rest of his life. But if your wife was an illegal alien named Consuela, who gave birth in a Green Bay maternity ward, your new child would be a Yankee Doodle Dandy.

An instant US citizen with all the welfare rights that come with the birth certificate.

That last on the list of Trump immigration failures is the most curious of all, since Trump promised us in November 2018 that he was going to end “birthright citizenship” (the correct name for anchor babies) with a stroke of his pen.

Fifteen months later either Trump’s pen ran out of ink or the executive order is interred somewhere in Anonymous’ in–box.

That’s a real shame because Trump could have fulfilled this promise on his own. After the predictable lawsuit failed in court, one immigration scam would have been over.

The left and their stenographers in the Opposition Media who claim ending birthright citizenship is unconstitutional are simply lying, as usual.

Mark Levin said, “Not until the 1960’s [was] the Constitution …interpreted to convey birthright citizenship on the children of illegal aliens. And not due to any congressional statute or court ruling, but decisions by various departments and agencies of the federal bureaucracy.”

Decisions that can be countermanded by the president. The federal bureaucracy is at least intermittently controlled by Trump, so he can tell the executive branch to close the border in the maternity ward.

The question is, why hasn’t he?

Now that Trump has gotten rid of the hand–wringing Kirstjen Nielsen as secretary of Homeland Security and shown the door to the obstructionist who replaced her, he may be returning to immigration just in time for re–election.

Former Virginia Attorney General Ken Cuccinelli has been appointed acting director of the US Citizenship and Immigration Service and Trump is eyeing him as the next DHS secretary. And for a change Cuccinelli appears to support Trump’s immigration policy.

(I remain amazed that out of the 63 million Americans who voted for Trump he couldn’t find a thousand or so to hire for his administration. What a difference he could have made if he hadn’t opted for cocktail conservative retreads.)

Cuccinelli made the news when he issued a new rule that would exclude people on welfare from getting a green card. A law passed during the immigration crackdown inferno known as the Clinton administration already made it illegal to collect welfare and a green card, but squishes in the bureaucracy ignored this so they could feel noble spending your money.

Cuccinelli just made policy conform to the law. Currently being law-abiding is blocked by angry Obama judges, but they will lose in the end.

What’s appalling about Cuccinelli’s tenure so far surfaced in an interview he gave during a Christian Science Monitor breakfast. Naturally the question was framed by the OpMedia operative built around a lie.

Cuccinelli was asked what was he going to do “on changing birthright citizenship, or automatic citizenship for almost anyone born in the U.S., as enshrined in the 14th Amendment of the Constitution:”

He rejected the amendment lie and then depressed Trump supporters around the nation when he said changing anchor baby policy “hasn’t come up much in his work at USCIS.”

Changing that flawed, unjustifiable policy is one of the easiest immigration reforms on the table for the Trump administration. It would send a message around the world that the USA is finally taking control of its border and will implement immigration policies that benefit citizens first.

And so far, doing it is 15 months and a broken promise late.