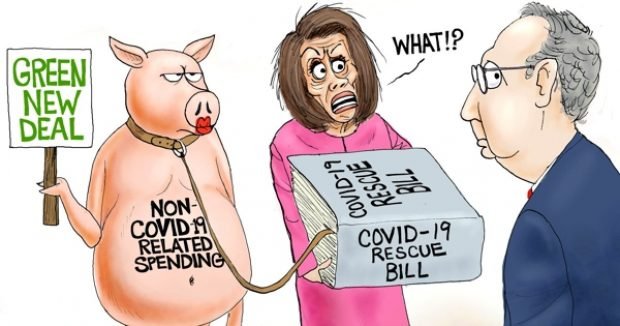 Democrats, and their allies in the leftist press, have not pitched in to help America get through this pandemic crisis. Rather, they seem to be enjoying, or are at least indifferent to, the suffering it causes their fellow citizens, and they are taking full advantage of the national misery in order to further their leftist goals.

First they called President Trump a racist for cancelling flights originating from China, and then they blamed him for not having halted these flights sooner than he actually did. These fool Democrats are crazy-bad people.

Recently, one not-very-bright couple ingested an aquarium cleaning product that had as one of its ingredients a component that sounds like the anti-malarial product called hydorxychloroquine, that President Trump and his medical advisors mentioned might be useful when prescribed by medical personnel, in making people sickened by the coronavirus get well sooner. Of course, President Trump was identified by America’s lying news agencies as the cause of this couple’s sickness, even though they could, and should, have read the warning label on the container and not have ingested the poisonous cleaner, and they should have sought medical supervision and advice before taking any such product. But they didn’t, and the husband died. They decided on their own to self-prescribe and to determine independently from medical advice, the proper dosage to take. But in spite of any fault that should have been attached to the sadly misinformed couple, for Democrats and the radical press, it’s necessary that President Trump be blamed first, last and always for anything that goes awry in America today.

It’s of special interest to note that after President Trump called for a financial stimulus bill to help corporations and individuals get from one side to the other of the financial crisis that has accompanied the coronavirus outbreak, irresponsible House Democrats packed the stimulus bill with trillions of dollars of pork, along with Green New Deal provisions that only a radical Democrat could think of, like assuring racial diversity on boards of directors of private companies; labor union representation on boards of directors; more money for Planned Parenthood abortions; new minimum wage rules; new emissions standards for airlines; same-day registration to vote, and wind and solar tax credits. This idiotic abuse of the Democrat’s solemn duty to help Americans in need has caused an unnecessary delay in getting much needed funds to families to pay their bills, and to companies to help pay the salaries of laid-off employees.

But probably the most disgusting aspect of Democrat obstruction throughout this entire experience is that the real roadblocks and obstructions Democrats have thrown at this effort to save lives and the economy were due to the Democrat desire to defeat, or at least blemish and injure, President Trump in any way they can. They want him to get no credit at all for any good deed he’s done during this crisis. In other words, Democrats revert to harsh, bare-knuckled, blatant, partisan politics when a crisis strikes, and they disregard any actual suffering or harm American citizens experience as a result of their ridiculous accusations and snide remarks.

In November of this year Americans will remember these misguided and destructive actions taken by elected Democrats and will hopefully vote all Democrats out of office, across the board.

Rebecca Masterson: Our nation’s foster kids shouldn’t be invisible — here’s one thing that must happen now

Biden’s Executive Order Threatens My Granddaughter, And All Girls In America

Tim Graham: Dr. Seuss or ‘Muppet Show’ trigger warnings? Liberals, spare us. You say nothing about this

Capmocracy - March 6, 2021 0
Candace Owens, conservative commentator and co-founder of BLEXIT, took to Twitter Saturday to condemn a bill under consideration in California’s legislature that would...
Opinion

Capmocracy - March 6, 2021 0
Parents, do me a favor. Take a look at your phone and count up how many pictures you have of your kids.I bet...