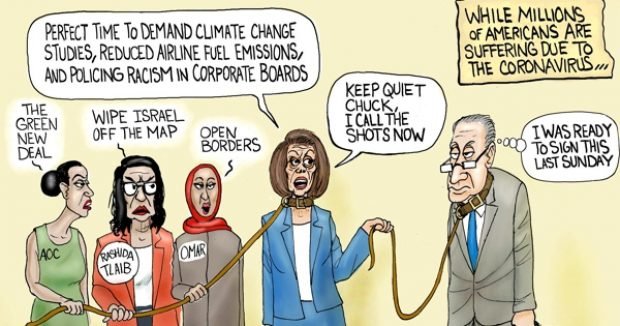 Democrats, either in their desperation to regain the power that they lost to Donald Trump in 2016, or in their exuberance to demonstrate a little relevance in the era of Trump, are showing their true colors with their unbelievably cynical attitude to America’s current health and economic emergency. Following are some examples of Democrat attempts to literally end political and economic life as we know them in America:

Going back a few years, at the beginning of his reign of error (and I do mean “error“), we witnessed Barack Obama proclaiming that he intended to “fundamentally transform America”. Our marvelous constitution, which assures liberty and prosperity to all citizens, wasn’t good enough for “the one”, so he felt a need to “transform” America in order to further his ideal of a weak and poor America at the mercy of Russia and China. Most Americans would much prefer to keep our constitution and our national independence in the world and take a pass on the transformation thing, thanks all the same.

Then, as Obamacare was being debated, we got a load of Nancy Pelosi scolding the nation and insisting that legislators had a responsibility to “vote for the bill in order to see what’s in the bill”. Honesty and transparency are not words in Ms. Pelosi’s vocabulary, and I sure as hell would not trust her for sensible legislation after her Obamacare performance, and don‘t even remind me of the scandalous and cynical loading-up of the leftist, trash, wish-list, filth she added to the coronavirus financial stimulus bill.

Then, most recently, South Carolina’s James Clyburn corrupted and subverted the much-needed coronavirus financial stimulus bill by telling his Democrat pals to vote for the stimulus package, into which Democrats had loaded trillions of dollars of pork and Green New Deal crap, stating that the finance bill was a “tremendous opportunity to restructure things to fit our vision”. Mr. Clyburn’s vision of the world would make America more like Haiti than heaven, and Americans have in the past repeatedly rejected all of the provisions that Democrats just last week re-introduced into the horrific House version of the financial stimulus bill. We just don’t like the Democrats’ plans to destroy our nation and our way of life.

These fool, anti-American Democrats need to know that American citizens don’t give a damn about their “vision“, and in fact we reject, fully and completely, their Communist, LSD-ridden visions, because their radical ideas would eliminate the constitutional principles that make us free and prosperous. We also don’t want our nation “transformed” along the lines prescribed by Obama, except to the extent that we can transform the Democrat party into non-existence and get some patriots in their place for a change.

Germany made its choice