Swiss politicians have allowed prostitutes to open up for business. Here the ubiquitous Dr. Fauci approves of Tinder dates getting down and dirty. But for some reason the thought of football players going hands-on is controversial. 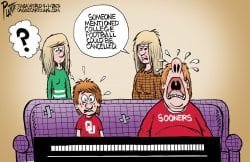 Initially, it looked like hatred of capitalism. Colleges are desperate for TV broadcast money to prop up athletic departments. Only hookers aren’t in the game for the joy of making new friends either. Blocking football must be another entry in the Great Pandemic Panic.

Government K–12 schools are going to get every last dime of your property tax money regardless of whether students are “distance learning” or playing Halo. Universities, though, are reluctant participants in the free market.

That’s why the NCAA Division I Council approved ‘voluntary’ workouts in football and basketball. The SEC will allow athletes on campus on June 8th. Big 12 schools begin on June 15 because SEC teams need an additional week of publicity to make that obscure league competitive this fall.

Lincoln Riley, head coach at my alma mater the University of Oklahoma, is waiting an additional two weeks. OU will open July 1st just a few days after the Chinese Dragon Boat Festival concludes. Presumably, the Flu Manchu will be recovering from the festivities, making the virus weaker and less contagious.

The combination of money and football has the Washington Post’s Social Justice Warriors in an uproar. Columnist Jerry Brewer’s undies are particularly bunched, “here are two simple sentences to kindle your critical thinking: In many states, it may be too dangerous to have students on campus this fall. Nevertheless, universities are willing to consider staging football practices and games.”

Let’s take a brief intermission to review the SCIENCE!

In a study of 318 outbreak clusters in China — home of the Kung Flu — only two of the outbreaks occurred outdoors. Football practice (see above).

The CDC calculates for a person between the ages of 15 and 24 (think football age) living in the US the chance of any type of death during a single year is 80 deaths per 100K population. According to Johns Hopkins, the current death rate for the WuFlu is 30 deaths/100K and 80 percent of those are among the elderly.

Brewer can’t seem to grasp that if there are very few students on campus it will be safer for the players since there will be fewer potential virus vectors wandering around.

SCIENCE doesn’t matter to Brewer: “I don’t know what is more diabolical: prematurely committing to college-as-usual and ignoring the health risks for the hidden purpose of preparing to play ball or drafting players to come back and be COVID-19 football guinea pigs.”

That argument ignores the fact the players and their parents have a great deal of say in the matter. If they subscribe to his ‘we’re all gonna die!’ philosophy, the players will stay home.

Brewer acts like players are being ordered to participate in the Ebola Bowl, but the facts don’t support his dire fantasies. Iowa State intends to open its season September 5th as planned, but only season ticket holders will be allowed in the stadium. That cuts capacity in half, reducing exposure for fans, just as their masks will reduce the volume of cheering.

When you write for the WoePost, everyone either is a victim or will soon be one. What Brewer obviously never considers is most of the players will WANT to come back. Brewer was not a college athlete and there is no evidence he competed in a serious athletic league after college. That leads me to believe he doesn’t understand players define themselves by what they play. Paternalistically banning football in the name of neurotic safety concerns, erases the core of their self–definition.

Football is an inherently dangerous sport and players are well aware of that. Football players are risk-takers. If they weren’t they’d be playing ballerina ball or swimming. Letting a virus that mostly passes over young people kill their season is simply cruel.

Brewer’s solution is in keeping with the scolds who lack proportionality and ignore SCIENCE that doesn’t conform to their ideology: “No school. No ball. No excuses.”

That’s easy enough for Brewer to declare. The clock isn’t ticking on his career.