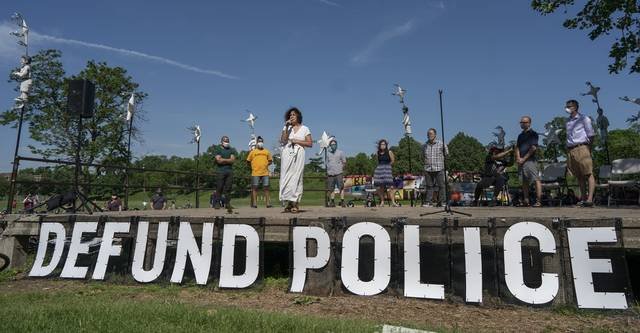 Disbanding police departments works! This is the claim by liberal news organizations touting the positive effect of “re-imagined” policing in Camden, NJ, that resulted in a 60% reduction in homicides and a 42% reduction in overall violent crime between 2011 and 2019. In the aftermath of George Floyd’s death, while in the custody of Minneapolis police, Black Lives Matters, ANTIFA, democrat politicians, and most of the mainstream media are pushing for police reform. The measures they’re proposing include defunding, disarming, disbanding, and modifying racial make-up of officers.  All eyes are on Camden, New Jersey as the model to emulate for improving policing across the country. What did Camden, New Jersey, do that made them a success? Did they follow the script of “defund, disarm, disband or race-based hiring”? The short answer is none of the above, but that doesn’t matter to the dishonest purveyors of information we refer to as “the news.”

“Camden, N.J. disbanded its police force. Here’s what happened next.” CNN chimed in with its predictable falsehood, “Camden completely dissolved its police department in 2012 and replaced it with an entirely new one after corruption rendered the existing agency unfixable.”

The media gives a false impression that all the existing officers were fired and new ones hired to remedy “corruption.” In reality, most of the existing officers were re-hired by the county at a substantial pay cut. This was about “disbanding,” “abolishing” and “defunding” the police union, NOT the police officers because they were inherently bad, racist, or whatever politically correct but factually incorrect and undeserved label placed upon them.  The leftist media are doing here what they do nationwide, indicting the character of all officers for the sins of a few, and by doing so, misrepresenting the truth to the public.

The police union in Camden, N.J. was “disbanded” because union contracts were far too expensive.  The mayor Dana Reed said the benefits were simply unaffordable and that “the city signed police contracts it couldn’t afford because saying “no” to the police union never felt like an option.” The police union in the city was officially eliminated in 2013, which led to re-hiring existing police officers as county employees at nearly half the cost. The average annual costs per officer fell from $183,168, including extraordinarily generous fringe benefits, to $99,605 after ending the city union contracts.

Most articles on the subject of Camden erroneously point to a “completely new police force,” “community relations,” and hosting “cookouts” as the reason for the “42% reduction in violent crime between 2012 and 2019. The idea of pursuing more outreach and building rapport in the community is noble and valuable. However, the most compelling reason for reduced crime rates is given less attention because it’s not a popular one.  The real truth is that nothing was “disbanded,” in fact, the number of officers in the department more than doubled. In addition to re-hiring officers from the prior city force, and an additional 150 new officers were added. The department went from a low of 175 officers in 2011 to over 400 today.

Amid layoffs due to funding difficulties, the Camden department roster was cut in half, knocking it down to 1930’s levels. Police chief Scott Thompson said those staffing reductions eliminated his entire homicide and narcotics units in one fell swoop and that brazen criminal wore t-shirts saying, “January 18, 2011: It’s Our Time” – denoting the date that half the force was laid off. During this time, Camden was ranked the most dangerous city in America, with a murder rate more than 18 times the national average, according to the FBI’s Uniform Crime Reporting Program. Citizens locked themselves indoors to avoid being victimized by drug dealers and thugs roaming the streets. Iron bars that residents call “bird cages” extended from rooftops all the way to the ground invoking images of a self-imposed Alcatraz. Playgrounds devoid of children were the norm, and stepping outside one’s door after sunset became Russian Roulette.

Camden’s murder rate began to rise again in 2016, almost doubling the year before, listen to the local citizens take:

With the cry to defund, disband, and eliminate police departments altogether, it is ironic that Camden New Jersey is considered the prototype, going forward, given that its success in reducing crime is the result of more than doubling the police force and increasing the presence of officers on the street. Democrats are avoiding this truth because it is offensive to their radical base, so they pontificate in front of cameras about hosting community cookouts instead of attributing falling crime numbers to a police force that is well over twice the national average for a city its size.