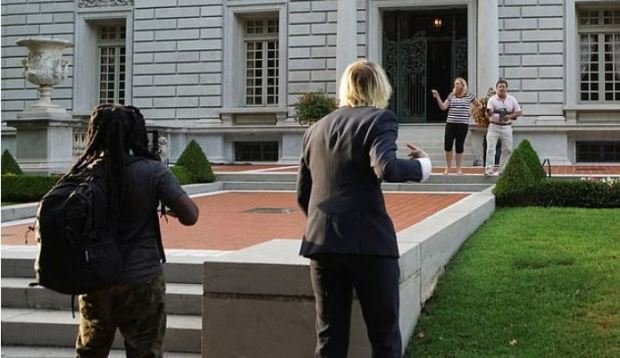 A Missouri attorney said political posturing is the reason that the St. Louis couple who went viral for defending their mansion with guns had their firearms seized with charges looming.

Attorney Kevin Jamison, author of the book Missouri Weapons and Self-Defense Law, said the case against Mark and Patricia McCloskey, the duo that has become well-known for warding off protesters with an M16A2-style rifle and handgun, is “weak to say the least.” Jamison suspects political bias to have played a role in the circuit attorney’s decision to seize the McCloskey guns and ponder charges, he told the Daily Caller News Foundation in an interview.

“The prosecutor has a lot of latitude in filing charges, but I think she’s here just to posture for her political base,” Jamison told the DCNF. “We have a legal system that is operated by people, and people bring their prejudices with them when they come to work.”

St. Louis Circuit Attorney Kimberly Gardner issued the order for police to confiscate the couple’s guns, despite not yet filing charges on either one of them, St. Louis Police told the DCNF in an email. Officers left the McCloskey home with the rifle on July 10 and later retrieved the handgun, which was given to the family’s former lawyer, according to 5 On Your Side.

Gardner was quick to react to video of the incident on Twitter shortly after it became public, calling the McCloskey’s behavior a “violent assault” that the city “will not tolerate.”

Official charges have not yet been filed against the pair, but Mark McCloskey said “the rumor is that we are going to be indicted shortly,” in a Tuesday appearance on Fox News.

In a video posted to social media, peaceful protesters in St. Louis calling for police reforms walked past a couple brandishing firearms as they were ordered to stay away from the couple’s home https://t.co/bYl06iAiTo pic.twitter.com/wOZ1Wr3yac

Red flag laws allow local police to confiscate guns without filing charges if someone is deemed a threat to themselves or others; however, Missouri doesn’t have a red flag law. The DCNF asked St. Louis police which law they used to justify the warrant, but they deferred to the circuit court who didn’t respond to the DCNF’s request.

“It just seems like they’re harassing these people,” Jamison told the DCNF.

St. Louis police told the DCNF that the McCloskey’s called 911 for help the day of the incident to report multiple individuals busting down a private gate and forcing entry into their private community. The record of the 911 call lists the incident as a trespassing and 4th degree intimidation, according to emails, but St. Louis police would not say if any demonstrators were arrested.

Jamison, who has over 30 years of law experience, can only cite one other case from memory where the person who dialed 911 wasn’t considered the victim in the eyes of the law.

The Gun Owners of America, a prominent pro-Second Amendment group, slammed Gardner for her decision to confiscate the couple’s guns.

“The circuit attorney in St. Louis, Kim Gardner (D), has demonstrated her disrespect for gun owners, the Second Amendment and the basic human right to armed self-defense by confiscating Mark McCloskey’s AR-15,” GOA Senior Vice President Erich Pratt said in a statement given to the DCNF.

Moms Demand Action, an anti-gun organization, said on Twitter that the “armed intimidation” displayed by the couple “has no place in our society.”

As peaceful protesters marched through St. Louis yesterday evening, an armed white couple pointed firearms at the crowd from their front lawn. This kind of armed intimidation has no place in our society. https://t.co/yb04wSi4Zp

Twelve GOP lawmakers wrote a letter to Attorney General William Barr last week urging the federal government to uphold the firearms rights of the McCloskeys after news broke of the gun confiscation, according to Fox News.

Republican Missouri Sen. Josh Hawley on Thursday also wrote to Barr calling the actions of Gardner an “unacceptable abuse of power and threat to the Second Amendment,” according to a separate Fox report.

President Donald Trump has expressed interest in intervening on behalf of the couple, said Republican Missouri Gov. Mike Parson, according to Business Insider.