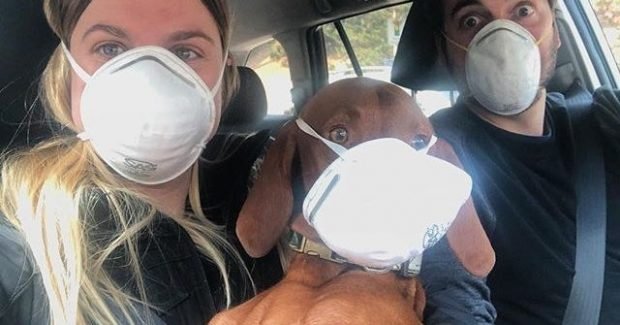 Indiana Gov. Eric Holcomb and Ohio Gov. Mike DeWine both issued statewide mask mandates Wednesday in an effort to slow the spread of coronavirus throughout their states.

The mandates from Holcomb and DeWine, both Republicans, were announced on Twitter Wednesday.

The Indiana mandate will go into effect Monday, and will apply to everybody over eight years old. Face coverings will be required when out in public, with an exception for those engaging in “strenuous physical activity,” according to Holcomb’s announcement.

“The state will approach enforcement of the face covering requirement with an emphasis on education. A penalty can be levied under the authority of state law. Local governments may impose more restrictive guidelines,” Holcomb tweeted.

As we continue to monitor the data, we’ve seen a concerning change in some of our key health indicators.

Hoosiers have worked hard to help re-open our state & we want to remain open.

By masking up, we can & will save lives & slow the spread of #COVID19.

DeWine’s mask mandate is set to take effect Thursday. His order in Ohio mirrors that in Indiana, requiring masks when inside public spaces, outside in crowded areas and when riding public transportation, according to his statement.

“Wearing masks will make a difference. It will determine what our fall looks like,” DeWine tweeted.

Wearing masks will make a difference. It will determine what our fall looks like. We want kids to go back to school, we want to see sports — to do that it’s very important that all Ohioans wear a mask. #MasksOnOhio

In Indiana, the number of coronavirus cases is approaching 60,000 as the state has reporting daily records in recent days. Ohio also reported daily highs recently, and has had over 1,000 positive tests every day since July 7, according to Johns Hopkins.

The mandates in Indiana and Ohio follow similar requirements in states around the country. Both Democratic and Republican governors have recently mandated masks in an effort to get the climbing case count under control.

Republican governors in Texas, Alabama, Arkansas issued mandates last week. The announcements in Indiana and Ohio mean that 31 states plus the District of Columbia have mandates in effect as of Thursday, according to an Axios tally.

Some Republicans, however, have been refused to follow suit. Georgia Gov. Brian Kemp signed an executive order Monday barring cities in Georgia from enforcing municipal mask mandates, and President Donald Trump has said repeatedly that he does not support a national mask mandate, despite recent comments encouraging Americans to wear masks as much as possible.