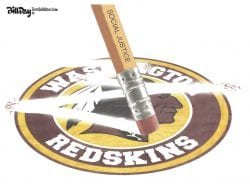 Killing the Redskins has been a perennial issue for a small group of leftist white eyes who know better than Indians what is and what is not offensive.

In 2014 Snyder came closest to losing not the name, but the trademark. The US Patent & Trademark office was seriously considering removing trademark protect from ‘Redskins’ because it was allegedly a pejorative term.

Removing trademark protection would have been a severe financial blow for the owner since he would no longer have any legal recourse against spirit–wear manufacturers who used the likeness in their products.

In response Snyder founded the Washington Redskins Original American Foundation and funneled money to various tribes for positive PR. At the same time the Washington Post made the mistake of trying to put some SCIENCE behind its nickname fantasy and commissioned a poll among people who identified as Indians.

The Post reported, “Nine in 10 Native Americans say they are not offended by the Washington Redskins name.” And surprisingly, “An even higher number — 8 in 10 — said they would not be offended if a non-native called them that name.”

“That name” is a nice touch and shows the Post was planning to stay on the warpath even if the braves weren’t. This fixation among the chiefs–without–Indians brings to mind Churchill’s definition of a fanatic, “one who can’t change his mind and won’t change the subject.”

You may ask yourself how a black man dying in police custody and Confederate statues relate to an NFL team nickname that makes to reference to neither.

That only proves you fail to understand the left’s ‘seamless grievance’ that unites all anger.

Yet what finally sent ‘Redskins’ to the Happy Hunting Ground of discarded nicknames wasn’t ‘social justice.’ It was capitalism. Companies refusing to sell the team merchandise and minority owner Fred Smith — who runs Federal Express — asking him to change the name hit The Danny in the pocketbook where it hurts the most.

Snyder is notoriously financially rapacious. He may have loved his team, but fans were just so many cows to be milked. For a number of years concession prices at his stadium were among the highest in the league. Snyder even persuaded county government to let him control the pedestrian approaches to FedEx field so he could force fans to use his much more expensive parking lots.

He strip–mined fan’s wallets until the team’s lousy performance on the field made attendance a problem.

Revenue loss was why the 2014 trademark fight was so dangerous and why Snyder finally surrendered now.

Snyder could have the last laugh, if he’s willing to be bold. The Danny could be making big money this fall.

Forcing Snyder to toss a team name he loved for a boring, innocuous, focus–group tested nullity with no history means he can forge ahead where no other owner has dared go.

Snyder can sell naming rights to the TEAM!

What a tremendous thumb in the eye for Washington Post whiners, the NFL front office and the other owners who abandoned him. While those craven owners are wondering if they will be forced to refund money to advertisers because the Not For Long league has driven off its audience with social justice pandering, Snyder will be cashing naming rights checks!

Or for that matter, he could sell naming rights to Ex-Lax and the team could be the Potomac BMs.

Why would Snyder care? Ten years later he can sell the name all over again to a new buyer. Snyder loved the Redskins. Now that’s gone. He can fall back on his first love, money.

Washington fans should not think for a moment that controversy will no longer be on the NFL’s sidelines. And we aren’t referring to the mandatory everyone stand for the black national anthem and everyone kneel for the real National Anthem.

This controversy will take place outside the stadium. Now the left is targeting people who try and sell extra tickets to games, because the term ‘scalpers’ is said to be demeaning, too.

The Silence Of The Left When It Comes To Voter Fraud

Capmocracy - December 5, 2020 0
You have probably heard many times already in the mainstream media that there is no evidence of voter fraud in the 2020...