Scott Saulters wasn’t sure if his film had just taken one of the two top prizes at a recent film competition.

Although Saulters has been in Taiwan for 15 years and is proficient in Mandarin, the award ceremony for the inaugural “Bi Tian Iann” (眯電影) short film contest was conducted entirely in Hoklo (also known as Taiwanese), a language he can’t speak.

“I thought I heard it, but I didn’t want to look too excited,” he says.

Despite his limited command of the tongue, Saulter’s entry, Wu Yu Tzu (烏魚子, mullet roe), took first place in the amateur category of the competition, which called for three-minute submissions with at least 80 percent of the dialogue in Hoklo.

The contest was organized by PTS Taigi — the PTS’ Hoklo-language channel launched in July last year, along with the Taipei Film Commission and the Taipei Culture Foundation.

“I wasn’t really too concerned about making a film in a language I cannot speak, as I can speak Mandarin, which is close enough to not make it a completely foreign experience,” Saulters says. 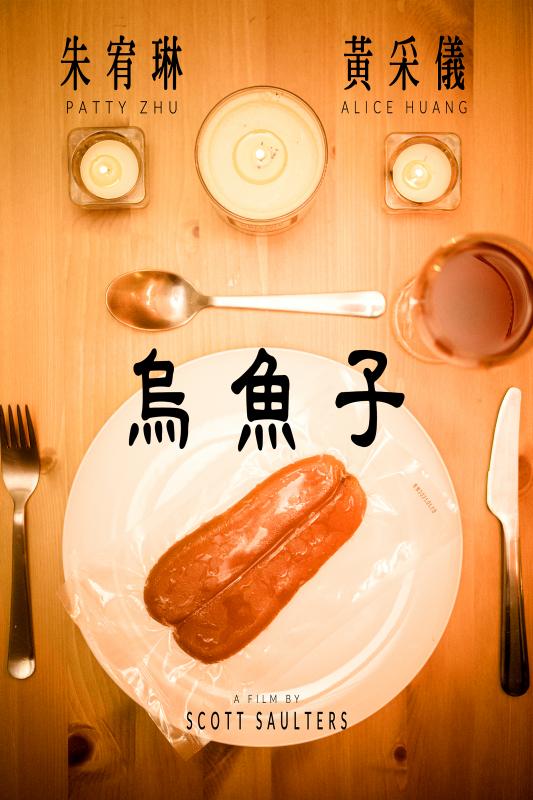 It helps that Saulters’ partner, Patty Zhu (朱宥琳), is a Taiwanese stage actress whose mother tongue is Hoklo. Zhu, who stars in Wu Yu Tzu, says the two began writing and shooting shorts after the COVID-19 pandemic put her out of work.

Saulters, who works for a gaming graphics company, returned from a business trip to the US right before the 14-day mandatory quarantine was imposed. Believing that they would be permanently stuck at home, the two started setting up the scenes for Wu Yu Tzu.

“The [Centers of Disease Control] told me two days later that they had made a mistake,” Saulters says. “But we had already made the plans.”

They looked up film competitions and found that “Bi Tian Iann” fit the timeframe and parameters the best — except for the language. Saulters already knew the script pretty well when they switched it to Hoklo, though he still had some difficulties editing since the scenes weren’t filmed in order. As a musician, he treated the sounds as musical notes during the post-production process.

“There are a lot of nuances to the [Hoklo] language … that give it its beauty,” Saulters says. “I perceive them as music qualities, similar to rhythmic motifs, melodic inflections, variations in tempo and so on. I allow this almost unconscious information to influence and guide the visual structures.”

Zhu, who grew up in Taipei, says she feels that when Hoklo is used in a local film or drama production, it almost always features old people in the countryside, temple performers or stereotypical tropes such as gangsters or loud aunties. When her colleagues were assigned Hoklo roles, she noticed they would automatically assume exaggerated personas to cater to this stereotype.

“It’s as if the language changes their character or the settings,” she says. “The transformation happens so naturally, but it shouldn’t be this way.”

As someone who says that the language “makes her feel like home,” Zhu feels uncomfortable with this continued portrayal. The situation contrasts with the music industry, where Hoklo pop, rock and rap enjoy considerable popularity.

However, the reality is that Hoklo is not heard very often in Taipei. “The settings still need to be logical,” Zhu says. “It’s implausible to show crowds chattering in Hoklo on Zhongxiao E Road.”

The resulting film portrays a simple phone conversation between a woman and her mother. Zhu’s character is asking her mother how to prepare mullet roe for a dinner guest, but the mother is more interested in her love life. It’s one of those seemingly casual but loaded conversations between family members in Taiwan, and Zhu feels that Hoklo can better express this roundabout way of speaking.

“The language needs to be modernized in order to be preserved,” Zhu says. “Only by presenting it in new ways can we open more avenues and possibilities for its development.”