CONTROLS:
The CECC tightened its border policy because of the high infection numbers in the Philippines and a high positivity rate among travelers from there

Starting on Wednesday, all travelers from the Philippines would be placed in centralized quarantine facilities for 14 days after being tested for COVID-19 at the airport upon arriving in Taiwan, the Central Epidemic Command Center (CECC) said yesterday.

The center made the announcement as it confirmed a new imported COVID-19 case — a Taiwanese woman who had returned from the Philippines.

The CECC tightened its border control policy after about 3,500 new COVID-19 cases were reported in the Philippines daily over the past two weeks and a high positivity rate was detected among travelers from that nation, said Minister of Health and Welfare Chen Shih-chung (陳時中), who heads the center. 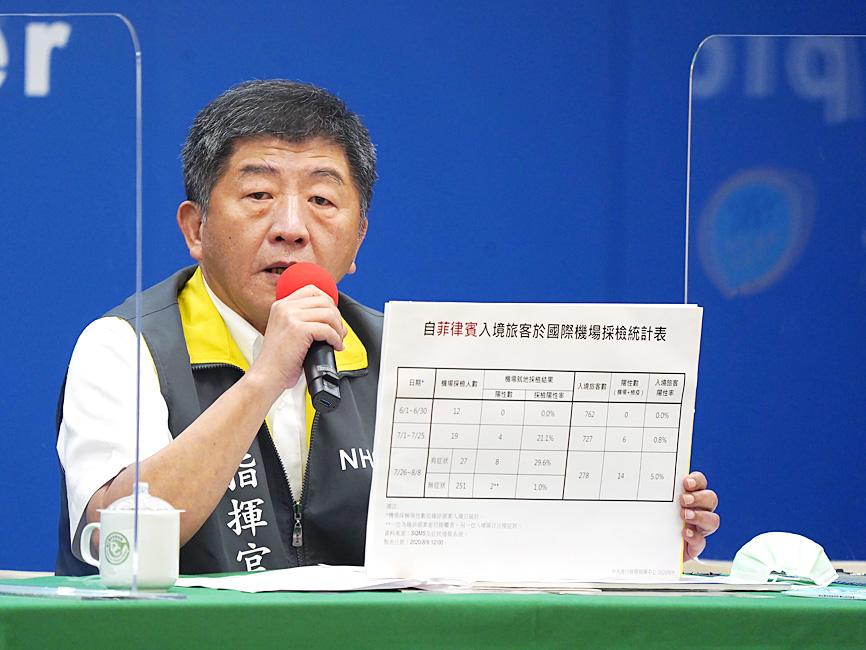 Taiwanese and foreign nationals who hold an Alien Resident Certificate or a resident visa would not need to pay for their stay at a quarantine facility, the CECC said.

Other foreign nationals traveling from the Philippines would be required to present a certificate showing that they do not have COVID-19 obtained within three days of their departure for Taiwan, and also pay NT$1,500 per night for their stay at a quarantine facility, it said.

Among the 762 travelers who arrived from the Philippines in June, 12 were tested for COVID-19 at the airport for having symptoms, but none came out positive, Chen said.

From July 1 to July 25, 19 of 727 arrivals from the Philippines were tested at the airport for having symptoms, four of whom, or 21.1 percent, tested positive, and another two later tested positive during home quarantine, he said.

However, after a policy was introduced requiring all travelers from the Philippines to be tested upon arrival, 278 people were tested from July 26 and Saturday, 14 of whom tested positive, which is a positivity rate of 5 percent, Chen said.

The rate is much higher than the 0.03 percent for travelers who arrived from other countries during the same period, he added.

Regarding the new confirmed case, Chen said that the woman is in her 20s and had traveled to the Philippines on Jan. 20.

She developed a cough and a runny nose on July 30, but did not seek medical help and instead took self-prescribed medicine, he said.

She experienced an impaired sense of smell on Tuesday and recovered after she returned to Taiwan on Friday, Chen said.

She wore a mask and an isolation gown on her flight from the Philippines, he said, adding that she did not take the mask off to eat or drink during the trip.

After reporting her symptoms, she was tested for COVID-19 at the airport and taken to a quarantine center, where she remained until the test result came back positive yesterday, making her the nation’s 480th confirmed case, Chen said.

Twenty-one people who had come into close contact with the woman have been identified, including three in the Philippines, who would be informed, he said.

Seven passengers who sat close to her on the plane would be placed under home isolation, while 11 crew members, who were wearing protective gear during the flight, would be ordered to practice self-health management, Chen said.

Chen was asked about news reports that a COVID-19 antibody (serology) test conducted in Changhua County by National Taiwan University’s (NTU) College of Public Health and the Changhua County Public Health Bureau has found people with antibodies indicating they had been infected with the novel coronavirus.

The survey was launched in June with the aim of testing more than 10,000 people, including close contacts of confirmed cases, people who had been placed in home quarantine, people living in long-term care facilities and healthcare workers.

College vice dean Tony Chen (陳秀熙) on Saturday said that about 3,000 people had been tested and that positive results have been found among four groups, adding that the final results would be announced on Aug. 25.

The presence of antibodies means that the person had contracted the disease and would not affect the current disease situation, he added.

However, Chen Shih-chung said the results have not been published, so the number of people with antibodies remains unknown.

“As we have stated before, reporting zero domestic cases does not mean zero local infection risk, and that we are pursuing a controllable risk,” he said, adding that domestic cases with unknown sources of infection have not caused widespread outbreaks.

Meanwhile, in response to media queries, Infectious Disease Society of Taiwan chairman Huang Li-min (黃立民), a pediatrician at NTU Hospital, said that he has heard that the survey detected a few people with antibodies.

“What that tells us is something that we already knew — the coronavirus exists in Taiwan, but not much, and it has not caused an outbreak, because our community disease prevention network is pretty effective,” he said.

The findings mean that some people might have brought the virus into local communities, but they have not transmitted it to many people, so the infected individuals were not found in contact investigations, Huang said.

Taiwanese have done a good job in disease prevention, because prevention relies on people wearing a mask and washing their hands frequently, he said.

Taiwan has the ability to prevent the coronavirus from spreading locally, but the disease could spread again if the nation lets its guard down, so people must continue practicing protective measures, he added.