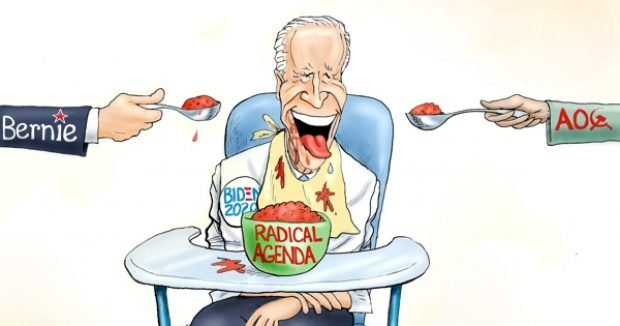 It’s one thing, and completely understandable, for a wife to defend her husband’s reputation and good name, but in the case of Joe Biden, when his wife is claiming that her husband has a clear and active mind when anyone can see that his mind is working very slowly in recent months and that he has a defective ability to think and reason, especially when that husband is a candidate for the presidency of the United States, we can wonder exactly how sincere she is about her husband’s welfare.

Has the Democrat upper crust promised Jill Biden a financial reward if she is successful in convincing Americans that Joe is healthy mentally and can get him elected president? Does she know which Democrat person or committee will be making policy decisions for her muddle-headed husband if he should be elected president? Poor Joe Biden is being embarrassed, laughed at and insulted every time he speaks or makes a virtual campaign appearance, and are we to believe that his wife is unable to see that he has a cognitive problem?

If Biden becomes president who will negotiate with foreign heads of state? It certainly won’t be Joe who stands up for America’s welfare against China or Russia. And whatever committee attempts to make Biden’s “woke” and progressive policies with a Communist or other dictatorial nation, will likely bow to that nation’s demands as quickly as Obama bowed and genuflected to the crown prince of Saudi Arabia a few years ago.

If the Democrat party, with the willing participation of Mrs. Biden, are just using the recognizable name and face of Joe Biden to win the 2020 election, will they then allow him to gracefully retire and walk away from the presidency and allow an unknown person or committee to take over and control his administration?

It would be interesting to know what Biden’s VP candidates are being told about him. Are they actually being interviewed by Biden, or are his Democrat party surrogates doing the culling for the VP slot? Do the potential VP candidates think that upon his retirement, soon after being elected president, that one of them will become president as the constitution states, or have they been told that they’ll have to do the bidding of the committee advising Biden and allow Biden’s name to be used in order to get control of the United States government?

Whatever the VP candidates have been told, they have to be weak if they accept the position of being Biden’s running mate with anything other than a full constitutional guarantee of succeeding the president upon his incapacity, and since all of the VP candidates are women, per Biden’s own insistence, what must Democrats think of women if they treat these women in this disgusting and disrespectful manner?

Has anyone in the leftist, pro-Democrat press expressed any interest in the Biden candidacy, and one wonders if they know the complete story of the Biden succession but are part of the plot to keep it covered up in order to take over the United States government after Joe is gone.

The American Democrat party is comprised of the most cynical and corrupt people this nation has ever seen for this obvious abuse of a man who has lost his full capacity to perform to the standards needed to become president in these very dangerous times.

Who are these filthy scoundrels running the Biden campaign, and what filth are they cooking up for the United States to have to endure?