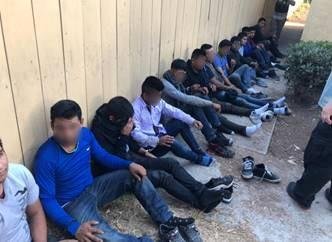 SAN ANTONIO – U.S. Immigration and Customs Enforcement (ICE) announced Tuesday the results of recent enforcement actions targeting removable aliens who have been arrested for, or have pending charges or convictions, for crimes involving victims.

“With each arrest, our aim is to not only protect their current victims but to prevent future ones. Our communities will now be safer after the removal of these wanted perpetrators,” said Jose Correa, field office director for Enforcement and Removal Operations (ERO) San Antonio. “We will continue to target criminals illegally in the U.S. who pose a threat to public safety.”

Data captured from July 13 to Aug. 20 shows that ICE officers arrested 125 at-large individuals in central and south Texas living illegally in the U.S., or who are removable from the U.S. due to their criminal histories. About 85 percent of those arrested by ICE on immigration charges also had criminal convictions or pending criminal charges.

Examples of arrests include:

ICE continues to target criminal aliens and other public safety and national security threats every day. ICE does not exempt classes or categories of removable aliens from potential enforcement. All those in violation of immigration law may be subject to arrest, detention and, if found removable by final order, removal from the United States. ICE takes many factors into account when targeting and arresting individuals, including their criminal and immigration history.

Victims of crime committed by individuals with a nexus to immigration are encouraged to contact ICE’s VOICE office if they need assistance. The VOICE office affords victims and their loved ones a single point of contact to obtain information regarding criminal aliens in ICE custody, including the ability to get automated custody status information, releasable case history about the perpetrator, or having an ICE representative explain the immigration enforcement and removal process. The toll-free VOICE Hotline number is 1-855-48-VOICE.

ICE exercises all appropriate prosecutorial discretion when encountering the family members of arrest targets and evaluates each individual situation to determine the appropriate course of action. In according with ICE Directive 10076.1 Prosecutorial Discretion: Certain Victims, Witnesses, and Plaintiffs, ICE should exercise all appropriate prosecutorial discretion to minimize any effect that immigration enforcement may have on the willingness and ability of victims, witnesses, and plaintiffs to call police and pursue justice.

Senate Democrats Unite Behind Biden’s Eco-Terrorism-Linked Nominee, All But Confirming Her To Lead The Bureau Of Land Management

Tokyo lied to get 2020 bid, now athletes paying the price