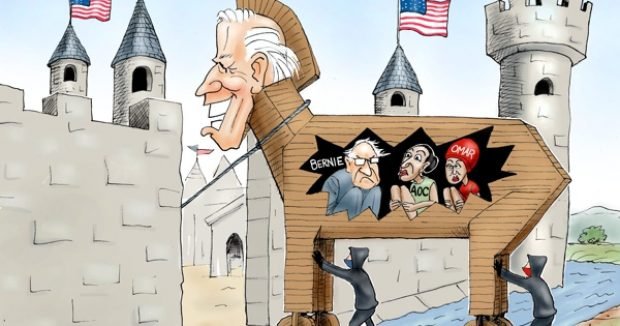 On August 31st Joe Biden, the Democrat candidate for president, who has behaved for the past two months as though his leftist thugs were not rioting, burning and beating someone senseless every single night, finally admitted that riots are actually taking place, and he announced that people committing the violence should be prosecuted, and that if Donald Trump is re-elected, the violence will continue into his second term. Is our pal Joey threatening the president?

Please note that Biden did not demand that the violence being committed by his leftist thugs stop immediately, and note also that during the Democrat National Convention the subject of the nightly rioting and beatings were not mentioned once in the four nights of the convention. It’s only now, with polling showing that public sentiment is running against the leftist destruction being done each and every night in numerous Democrat-run cities, that he is mentioning this subject, because President Trump is benefiting from the violence of the radical left.

Most reporters who have remarked on the Biden speech have interpreted the words as stating that Joey is predicting that the Trump administration will be the cause of the violence if Trump wins.

But my take on Biden’s words, especially in light of the fact that the rioters are Democrat storm troopers under Democrat control, is that Biden was promising that the Democrat party would continue to support and organize the violence after Trump is re-elected, in order to block any presidential actions Trump wants to perform for the benefit of the American people.

One has to forgive old, addled Joey for being less than specific with his predictions about President Trump’s re-election, but since Trump has nothing to do with the Democrat rioters who have destroyed Portland, Seattle, Baltimore, DC, New York, Chicago and other Democrat-run cities, why would Trump winning the 2020 election suddenly cause him to order more destruction during his administration? His promise is that after his election he’ll oversee peace and prosperity, not more Democrat-inspired destruction.

Biden may lie constantly and ignore violence in order to let his troops do his dirty work, but he unintentionally let the cat out of the bag with his speech detailing how violent he will make America after Trump’s re-election. Joey isn’t too smart.

Why I Will Vote Trump in 2020 – Promises Made Promises Kept