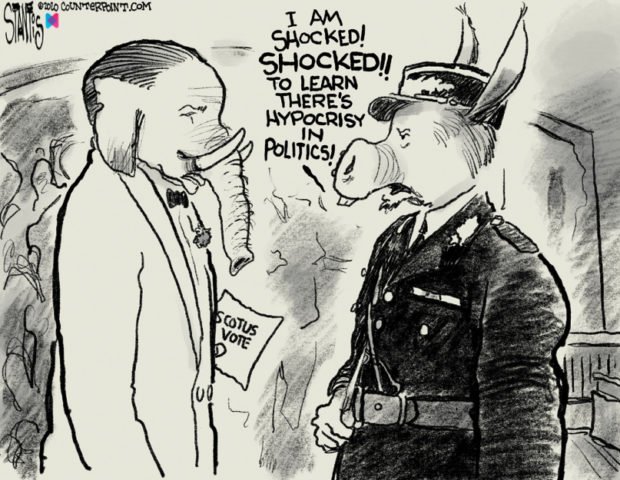 This is a copy of a post by a gentleman named Andrew Harmon, a postal employee.  It’s well worth the read.

“I am an employee of the USPS.  Like everything else the media gets their hands on, the current news about the USPS, and especially Trump’s involvement with it, is hyped and in some cases TOTAL Bull Shit. There are many, many issues that could be addressed.

Here are twelve of the most egregious pieces of bullshit . . .

#1 – Trump did NOT get rid of the former U.S. Postmaster General!  She retired!

#2 – Trump did NOT appoint the NEW U.S. Postmaster General!  He was VOTED IN by the Board of USPS Governors!

#3 – Processing plants have been shutting down and consolidating for YEARS now!  And yes, part of that process involves dismantling equipment, which is most often reassigned to ANOTHER processing facility and utilized there!  Some machines are dismantled and are not reused because, like everything else, they wear out and eventually aren’t worth fixing!

#4 – Yes, mailboxes in some areas are being removed. Why? Because mail volume in those areas has gone down. Whereas in other areas (like the greater Seattle area), the mail volume has recently INCREASED!  But this too has been going on for YEARS and as many as 14,000 mailboxes were removed during the Obama administration.  Was there outcry then?  NO!  And like Trump has NOTHING to do with the removal of mailboxes now, Obama had nothing to do with the mailboxes removed then!

#5 – The media LIES!  The USPS processing plant in Everett, WA handled all of the regional mail from the south border of Snohomish county to the US-Canadian border.  It closed in 2013 as part of a planned consolidation.  True, it was not initially to be the first plant in Washington to close, but that’s how it turned out.  The media had a field day with its closure and announced more than 300 employees would lose their jobs.  How many employees ACTUALLY lost their jobs?  ZERO!

#6 – The USPS is not in debt – at least not in the sense that almost all other large U.S. businesses are not also.  Does the USPS have loans?  Yes.  Are they in default on those loans?  NO!

#7 – Is, and has, the USPS been losing money for more than a decade now?  Yes.  But not for the reason most people think.  And certainly not for the reasons the media reports!  The truth is, the Postal Service is not losing money because of Amazon or any other tech company or technological advance in society.  It’s losing money because, in 2006, Congress passed a law forcing it to pre-pay its PENSIONS AND HEALTH CARE BENEFITS FOR 75 YEARS IN ADVANCE!!!  NO OTHER corporation, whether in government or the private sector has to do this!  The USPS has appealed this decision every year since during every administration and shift in Congress and it has never been repealed.  This means the pensions and health care benefits for people who have yet to be hired, or even BORN, the USPS is required to pay and lock up every month – IN ADVANCE!  Who bills them?  Congress!  And do they do so accurately?  NO!  Many times Congress has OVERCHARGED the USPS the monthly amount they are to pay.  Has the USPS then EVER been REFUNDED the difference?  NO!  So, believe it or not, without this law, the Postal Service would be turning a PROFIT!!!

#8 – When the federal government allowed other businesses to handle the package business, (DHL, FEDEX, UPS) these companies took the most profitable business and left the USPS with the least profitable: delivery to EVERY household in the U.S. and all U.S. Territories, (yes, even Puerto Rico and GUAM!), regardless of the cost of delivery.  Believe it or not, the Havasupai tribe that lives on the floor of the Grand Canyon receives first-class mail and packages delivered by MULES!!!  NO private company wants this business … or any business for 55 cents to every door in America – no matter the distances between the customers!

#9 – Trump’s treasury department DID loan the USPS 10 BILLION dollars at the end of July!  Why do they need it?  In addition to the reasons already mentioned above, the Corona Virus Pandemic has had a significant NEGATIVE effect!

#10 – Trump has said TWICE he WOULD IMMEDIATELY sign a STAND-ALONE bill to provide even MORE funding, but the Democrats in Congress will not present a bill that does not include other stipulations.  Some of these are stimulus checks provided to illegal aliens, mandatory voting by mail nationwide, and bailouts for the blue states with cities that have been damaged by rioting.

#11 – EVERY major private package delivery service utilizes the infrastructure of the USPS somehow, someway on a DAILY basis!  The private carriers simply do NOT have the capability of handling ALL their deliveries from END-TO-END without having the USPS help them out at some point!  But the USPS is LIMITED by CONGRESS concerning the amount the USPS is allowed to charge these private carriers – and they are getting one heck of a deal!

#12 – This is perhaps the most unknown of all.  The USPS is SELF-FUNDING!  Yes, that means it is NOT funded by U.S. Taxpayers!  This has been true since the mid-1980s!  The USPS revenue is earned, just like any other business via sales of products and services!  Any money given to the USPS by the Federal Government is in the form of LOANS that it must pay back!  Are they low-interest Federal Loans?  Yes!  But why shouldn’t they be?!!!”

Why Pelosi wants the USPS to get billions. (Sure would be nice to see this item get some PUBLICITY!!)

Nancy Pelosi’s husband, Paul Pelosi owns a firm called “Financial Leasing Services LLC”.  Nancy sits on the “House Appropriations” committee, a committee which appropriates funds to the USPS (United States Postal Service) and others. Why is this important??  Easy.  Nancy Pelosi passed a bill to sell off 9 BILLION dollars-worth of FEDERALLY OWNED Post Office Property to guess who??? “Financial Leasing Services LLC”!!!  Her husband’s firm.  He miraculously wins the contract. Why is this important?  The commission rate was set at 9%. That contract is almost 1 Billion in commissions. You think that is a Quid Pro Quo or nepotism?  Well if that’s not enough STINK, look at the new stimulus package Nancy is pushing. Nancy wants 25 Billion in that stimulus package for the USPS. 1.25 Billion goes to making sure voting ballots are legitimate. The other 23.5 Billion goes to “upgrading” the facilities so they are more attractive to potential buyers. For HER HUSBANDS firm!!!  These people are as corrupt as Satan herself.

Tucker: Kamala Harris may end up running the country

Trump Just SEALED THE DEAL In Final Presidential Debate! It's A...

The Hill - October 27, 2020 33
Schumer ripped Mitch McConnell for rushing the nomination of Judge Amy Coney Barrett through the Senate on Saturday. source