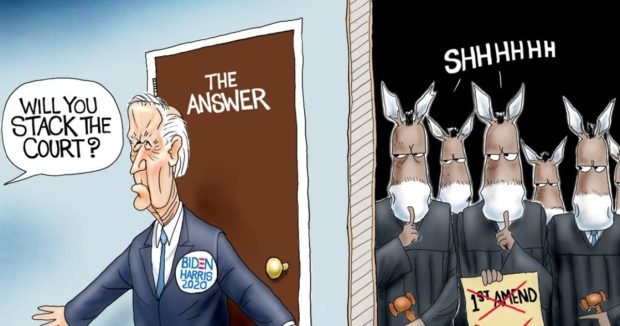 Just as it’s obviously true that only crooks and criminals would seriously propose defunding the police forces in America, as the Democrats are currently trying to do, it’s equally true that only people who hate America and who seek dominant control over public policy would propose such things as the Green New Deal, which Democrats are actively proposing, packing the Supreme court with liberal nominees and forcing all citizens to wear a worthless mask to prevent contagion to the least deadly disease we‘ve ever seen, all of which controls will destroy the freedom and prosperity of America.

Presidential candidate, Joe Biden, recently said that if he is elected to the White House in November, he will change the nation. While considering the idiotic words of Lunch Bucket Joe and what his real intention is for seeking the presidency, one may recall that his shared eight-year administration with Barack Obama had an even more dire slogan, which was their promise to “Fundamentally Transform America“. So we know where Joe Biden and his party of radicals stand on the issue of obeying the constitution and adhering to law and tradition: they want to destroy America and bury our constitution.

And when we’re reminded that Biden’s intended appointees to top positions in his future administration are avowed Socialists like Bernie Sanders, who has laid plans to reform America along the lines of the impoverished, Socialist state of Venezuela, and his naming Kamala Harris, the most radical leftist in the United States Senate to be his Vice Presidential running-mate, we know that the Democrat party is corrupt and intends only ill for the future of America, just so long as they are in power.

How Technology Has Evolved — And Cost The GOP Its Edge