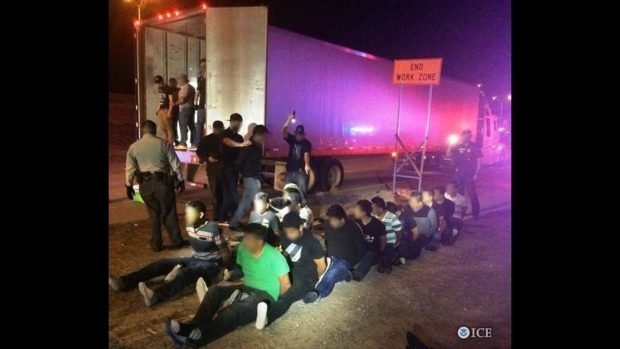 The first incident occurred during the late afternoon of October 13, when agents from the Laredo South Station, working with Homeland Security Investigations (HSI) and the Webb County Sheriff’s Office (WCSO), conducted a consensual search at a residence in which they discovered 123 individuals stashed inside.  They were determined to be in the United States illegally from the countries of Mexico, Guatemala, El Salvador, and Honduras.  The U.S. Border Patrol took them into custody pending investigation.

The second incident occurred a couple of hours later when agents along with HSI and WCSO acted on information received regarding another possible stash house.  Agents and deputies conducted a consensual search at the apartment in question and apprehended 13 individuals who were in the United States illegally from the country of Mexico.  Numerous U.S. citizens who were also present in the apartment were taken into custody for their involvement in the human smuggling attempt.

Later that evening, U.S. Border Patrol agents stopped a large human smuggling attempt at one of the Border Patrol checkpoints after a Service canine alerted to a tractor-trailer.  A search of the vehicle led agents to discover 84 individuals inside the trailer.  All of the individuals were illegally present in the United States and from the countries of Mexico, Guatemala, Honduras, and El Salvador.  All individuals were taken into custody for further investigation.

The final incident occurred early the next morning when agents at another Border Patrol checkpoint encountered a second tractor-trailer.  After a Service canine alerted agents, a non-intrusive scan was conducted on the vehicle that led agents to discover 74 individuals inside the refrigerated trailer.  The individuals, illegally in the United States, were from the countries of Mexico, El Salvador, Honduras, Guatemala, and Peru.  They were taken into Border Patrol custody for further investigation.

A total of 294 individuals were discovered being smuggled into the United States in the four separate incidents.  Ninety of them were from countries other than Mexico.

In all of the incidents, none of the individuals were wearing any personal protective equipment.  These callous and dangerous acts are several examples of the lack of regard human smugglers have for those they exploit for profit.  Despite the threat of the global pandemic, agents of the Laredo Sector are committed to their continued collaboration with their law enforcement partners to stop criminal acts and keep our communities safe.  The Vision of the Laredo Sector is to enhance the Nation’s security through innovation, intelligence, collaboration, and community trust.

Capmocracy - July 23, 2021 0
Generally speaking, the more accurate information that a person has prior to making a decision, the better the decision is...
Entertainment

Capmocracy - July 23, 2021 0
An untreatable fungus is spreading in health facilities in Washington, D.C., and Dallas, according to the Centers for Disease Control and Prevention...
Politics

Capmocracy - July 23, 2021 0
Senate Democrats are attempting to add funding for “Dreamers” and border security to their budget bill, Axios reported Friday. The Democrats are...