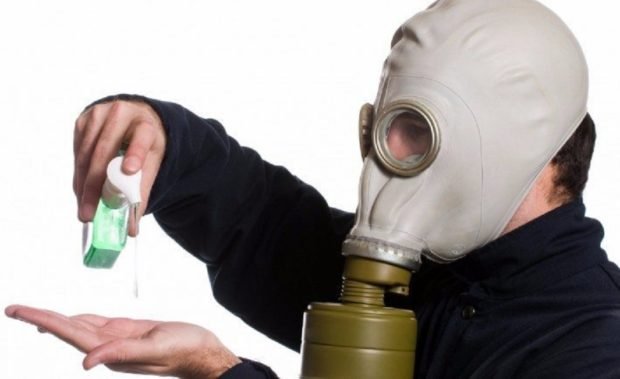 People laugh when I tell them my husband, rather a practical joker, calls me “Monk.” After I’ve shaken someone’s hand at a gathering after they’re right out of earshot, he’ll take the opportunity to lean over and whisper, “Wipe! Wipe!” All my life, I’ve been deeply afraid of germs.

In fact, I am a germophobic person from a long line of germophobic people. My grandmother was such a devoted “clean freak” that my father used to quip that she wrote the book, “Cooking with Lysol.” Her mother’s germophobic lifestyle caused my mom to be very neurotic. I would joke that she wrote the sequel, “Cooking with Valium.” Looking back, I remember my mother slapping white cotton gloves on me when I was five years old when we traveled to Asia. There was a fresh pair on my hands every day, and she made sure they were on my hands except when I was asleep. She taught me to use such chemicals as Lysol, bleach, good old hot water and soap, and when out in public, to cover that toilet seat with paper-like mad.

So you can imagine how things went when this whole “Covid-19” thing started. I’m obsessed with studying the subject. And if you’ve tried to research it, you already know – it’s head-spinning if you try to get real information that is outside the “big pharma narrative.” At this point in the game, most people, including myself, don’t know what to think. We’ve been hammered so hard by the media with conflicting so-called “facts,” who would know what to think now?

Well, here’s a fact I know for sure: Doctors disagree about Covid-19 all over the globe, the mainstream doesn’t give them airtime, and many are censored off social media (A good source to find censored doctors, including a group in London). That alone has made me suspicious about the “media” … why don’t any of them ever mention my immune system? Surely that’s the only thing standing between me and a world of germs. Don’t they know we’re constantly surrounded by germs everywhere we go?

Ever heard of nutrition, you know … Vitamin D? Vitamin C? You’d think the media never heard of Zinc. Why not? In the end, I found this article here. Why don’t they mention, are there no bins to put these filthy masks in? They’re all over the streets and hallways. I’m getting suspicious.

Many other medical practitioners follow “CDC guidelines” and “WHO” advice, even though the WHO was defunded by the president. With all the conflicting advice from them, who can blame him? Not I. They’ve been caught doing business with some of the worst people on the planet and are funded by the Chinese, who lied about the Coronavirus for weeks and let it be carried worldwide. I wouldn’t trust the CDC, which makes money off vaccines, as far as I could throw President Xi Jinping.

For one thing, the CDC and official medical narratives keep changing back and forth, wobbling like an older man. First, it’s no big deal, and then it’s a big deal. First, we’re not to wear masks, then we’re to wear them everywhere, then again to not wear them unless we’re sick, and then we discover on the box of masks…a disclaimer revealing they don’t protect us from Coronavirus. Back in March 2020 The CDC and WHO issued these statements about mask-wearing before abruptly changing course later. Recently, in October 2020, the Association of Physicians and Surgeons posted this article, yet everyone is still wearing them.

Wandering in the supermarket, those of us wearing masks, dutifully trying to protect ourselves and others from this “frankenvirus” as some call it, with these paper shreds in front of our faces, look at those of you who aren’t wearing one, as though you are crazy, or selfish; those without the masks on look at those wearing them, with pity in their eyes, knowing that we think we’re “protected” by this flimsy paper when it takes a full hazmat suit for these labs to operate … so, we’re certainly not protected at all, and that’s coming out. They have divided us with masks. That does amaze me!

When Coronavirus first hit, you should have seen us at my house. Soon as we’d come back from the store, I’d make sure we washed everything we touched, pretty much, if it was possible, and those things I couldn’t, I’d try to spray with alcohol or Lysol. China had released “leaked” videos (they probably created and leaked them), telling us it “clung to clothes and hair,” so we’d throw the clothes in the washer and shower up. I was pretty scared and believed everything I read. They said it could jump 14 feet and would last on surfaces a month. I’d think it must be true. After all, these are “the authorities,” like the Center for Disease Control.

At home, I’d re-do the doorknobs and levers, cleaning everything every day. That’s about the time that they were saying there were long quarantines, and that’s when I started to get suspicious. That, and realizing that people didn’t clean their steering wheels, car keys, and other items that would obviously be contaminated. If there were a 2-week incubation period, then by now, everybody in the USA would have it, I reasoned. My packages from China arrive a lot sooner than two weeks. And China had been hiding it for a while. Those packages would be covered with it, if it “lasted on surfaces” the way they were saying.

I knew UV light and heat kill viruses. But they were mocking Trump for mentioning these things. The news would actually spin it to say Trump was saying to “drink bleach” when introducing doctors who were to discuss new treatments. See more here.

I started to wonder about the obvious things right in front of me. Why weren’t there any “biohazard trash bins” the way there would be in a hospital? Masks were lying in the street. Why wasn’t everyone around me sick? We looked at the local hospital where this “pandemic” was supposed to have long lines. There was nobody there. The field hospital in Seattle was torn down without seeing one patient. This was starting to really look VERY fishy. That’s about the time the mainstream news was caught using Italian hospital footage claiming it was in the United States. And the Italians, wise folks, started doing autopsies on the massive numbers of dead, against WHO directives. Two physicians who reviewed postmortem cases (39) found the rationale to hypothesize a bacterium, could also be in play leading to the lethality of those contracting the virus. All that panic over Italian “Coronavirus,” remember (Newp. Bacterium)?

So, I started to study more and found that the survival rate on this thing, post-mitigation, and addition of therapeutic protocols, is presently ( October) 99.98% for most ages, even over 80 it is at 99.94%, that may be better than complications from the flu. That blew me away. I learned that the “Coronavirus” was on that trusty old Lysol can and listed on Internet medical sites as “the virus responsible for the common cold.” You are kidding me. We’re still locking down over, what may in the end, statistically be like the common cold?

This all seemed so unbelievable, but then studying the documentary by Epoch Times, they interviewed Judy Mikovitz, MD Ph.D., who had worked with Fauci for years. She explained it was the cold virus from bats, with the SARS gene element engineered into it, allowing it to access human beings by this thing called the “SARS spike.” Then they added the HIV genome to make it bypass the human immune system. Quite a clever biological monster. According to that documentary, the Frankenvirus inventor’s name is Shi Zhangli, a Chinese virologist working in the U.S. Taxpayer-funded Wuhan Lab. She was running around bragging about it in talks she gave in China to other scientists and students before it was released to infect the world. And right as that happened, the Chinese Communist military took over the lab.

I started to side-eye the news since they weren’t saying a word about this report from Epoch Times about the virus’s engineering. One minute, Nancy Pelosi is down in Chinatown, inviting people down there, and saying there’s nothing to worry about. The next, she’s masked up and preaching about how everybody should “Stay at Home Together, a wonderfully nonsensical statement of this whole charade. And yet, she didn’t stay home. She went to a salon to get a new hairdo and was photographed running around without her mask on. What on Earth …who are these people? Can’t keep their story straight or follow their own rules?

Similarly, when I saw Dr. Fauci throw out the first ball at the baseball game, someone photographed him sitting without his mask in the stands. Hasn’t he studied this virus for the last 40 years? Then why does his story keep changing, and why is he sitting there at the game, enjoying himself while everybody’s home, locked down? That’s right, and he’s sitting there maskless, laughing with his friends. What is this a game?

People are killing themselves. Suicides are up, people losing their livelihoods, marriages, families, homes, and their minds. The same thing when Joe Biden had his on-stage interview with Anderson Cooper, when they thought the cameras were off, they approached each other and got within a couple of feet from each other. No masks. Pictures kept surfacing of Democrats crowded together like in a football huddle, press corps as well, no masks, talking, in the halls of congress, and other locations. There was a video of some White House workers, one with a mask and one without, on a hot mic saying, “Take your mask off, this thing is like, so low, the numbers just came out at 99.99%?