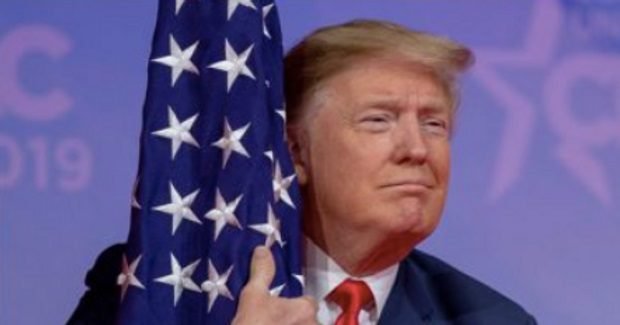 Of all the despicable actions taken against President Trump, nothing is more disgusting than the incessant assertion that he was Hitler reincarnated. Will anyone ever own up to the fact that this was a patently ugly and insidious lie?

After four years of holding an electoral mandate, the fascistic regime of Donald J. Trump is seemingly coming to an end. Despite efforts to assassinate his character until the final second of his tenure, barring any revelations of outrageous voter fraud Trump will seamlessly transfer power to incoming President Joe Biden.

Once Trump does peacefully transfer power, it will have to be admitted that neither Kristallnacht, nor forced relocation to ghettos, nor extermination camps cropped out around the countryside these past four years under his stewardship. It is safe to assume that Hitler would not have accepted a democratic ouster. All of this begs the question if anyone wonders if the media might have blown his alleged totalitarian fascism out of proportion? Of course, Antifa and Black Lives Matter have no problem destroying the businesses and properties of innocent Americans without a hint of irony.

For honest people, the closure of an embattled four years is one of frustration and disbelief. Trump’s departure comes as much a result due to the mendacious hatred spewed by media and peon alike as it was the unfortunate timing and overtly political response to the Chinese coronavirus. The media and Democrats did literally everything in their power to undermine and delegitimize Trump’s presidency, and they went to incredible lengths to ensure he was not a repeat winner. Despite Michelle Obama’s claim that Democrats would “go high” when Republicans “go low,” Democrats nevertheless reduced the horrendous suffering and genocide in 1940s Germany to mere political tokenism. In capturing the spirit of New York Governor Andrew Cuomo, “If just one more Jew died in the Holocaust that could be referenced as political ammunition against Trump, then it would all be worth it.”

THE HISTORY OF LIES AND ABUSE

The connection to Nazism, Hitler, and the Holocaust are vile and un-forgivable. Retrospect should make everyone immoral and moronic enough to hurl those epithets toward either Trump or his supporters feel ashamed, embarrassed, and foolish. They should feel all three of those at once, though it is far likelier they will feel none at all.

Loathsome attacks on conservative constituents are, of course, nothing new. Hillary Clinton attempted to package Republican voters as 2016 Word of The Year contender “deplorables.” At the time, it was just one of a string of divisive and disparaging statements made by Democrat presidential candidates. In 2008, Barack Obama condescendingly noted that rural Pennsylvanian voters will “cling to their bible and guns” instead of doing the right thing and voting for him. In 2012, then-Vice President Biden accused the Republican establishment of wanting to put blacks “back in chains” and most recently, as the nominee for president, at different times has labeled Trump voters as chumps, ugly, and similarly, racist, xenophobic, and Islamophobic.

In the big picture, the hackneyed aspersions of being labeled deplorable and bigoted feel like a back massage compared to the heinous and immoral comparisons to the Schutzstaffel and genocidal atrocities that remain the hallmark of Nazi Germany. Forgetting the fact that they sell themselves as the party of unity, Democrats and their complicit media allies departed from decency, tolerance, and unity – to be sure any intelligent reportage at all – and succumbed to banal, unscrupulous fear-mongering with a foundation in one of the darkest times in human existence

From the onset of his campaign, Trump had to ward off good-for-nothing “journalists” looking to make a splash in their own careers. In the run-up to the 2016 election, the media-manufactured relationships with white supremacy groups, and individuals like David Duke, plagued the Republican nominee. Time and again Trump rebuked the support from Duke (whose support for Biden this year, much like the Hunter Biden laptop story, was relegated to obscurity). No matter; the press and Democrats badgered the Republican contender for fabricated ties to white supremacists and neo-Nazis.

In August of his first year, radical leftist groups sought to tear down statues in a Virginia community. Presciently, the president said during the contentious week that the mob was going for Confederate generals that time; later on, they would go for the Founders. Naturally, he was both mercilessly mocked and ultimately accurate in his prediction. After the initial hoopla settled, which tragically left a young woman dead and another young man in prison for the remainder of his life, Trump spoke forcefully against the neo-Nazis in the crowd. On three separate incidents, first on the day of the event, two days later in the form of a press release, and again when talking to reporters the day after.

First, Trump’s remarks on August 12th were: “We condemn in the strongest possible terms this egregious display of hatred, bigotry, and violence, on many sides”

Then, the remarks on the 14th were: “Racism is evil. And those who cause violence in its name are criminals and thugs, including the KKK, neo-Nazis, white supremacists, and other hate groups that are repugnant to everything we hold dear as Americans.”

The Charlottesville Lie reinforced what ignoramuses the country over wanted to believe: Donald Trump was a racist, Nazi fascist. What clearer proof did one need? He said there were good people on both sides; that means he thinks neo-Nazis are good people. Except he didn’t. And he doesn’t. Even more insane, Joe Biden kicked off his entire presidential campaign on the predicated notion that Trump stood behind the white supremacists. Democracy truly does die in darkness.

In 2018, former director of the National Security Agency Michael Hayden tweeted an image of the gates at Auschwitz, coupled with a caption that read “Other governments have separated mothers and children.”

Democrat mouthpiece Stephen Colbert is not getting as much coverage for a statement made a few days after the election in which he begs Republicans to denounce Trump because this is no longer about a blue or red electoral map; no, it is about “democracy versus fascism.” Colbert states, without any remorse: “This is the time to get off the Trump train. Because he just told you where the train is going, and it’s not a passenger train. And he’ll load you on it someday too.” Disgusting.

Twitter and Facebook recently reminded the digital community that its standards include not allowing misinformation to be disseminated on its platforms. References to the New York Post’s explosive Hunter Biden story and articles delving into potential voter fraud in crucial swing states were immediately branded as misinformation. At the very least, one might expect overt comparisons to Nazi extermination camps to qualify as similar disinformation.

A central aspect of fascism relies on subverting minority and undesirable groups from positions of power and opportunity. Two of the most-frequently cited voting blocs that Trump allegedly hated, in the form of his sexism and racism, were women and blacks. What was his record?

“THE YEAR OF THE REPUBLICAN WOMAN”

Trump’s misogyny failed to deliver after he repeatedly defended, supported, and propelled women to positions of power and leadership throughout his four years. In closing out this first term, despite a defeat for himself at the polls, the president remarked on the list of outstanding female candidates and female winners in congressional races. Even in personal defeat, there is a lot to celebrate vis-à-vis the advancement of female voice and leadership.

Nonetheless, to kick off his presidential inauguration in 2017, a group of angry women marched in Washington D.C. and around the country. They felt threatened by his treatment of women. While he did admit that women let him grab them (as opposed to allegedly grabbing them without permission or nosing them as if appreciating a fine wine), his four years were remarkably free of ostensible oppression. No intrepid CNN reporter asked a single woman if they thought Hitler would have allowed Jews to march in a Pariser Platz in Berlin. Likewise, after four years, it is doubtful any of these same women could offer a concrete example of how their lives worsened by a Trump presidency. Exit polls on election night revealed that Trump performed better with white women in 2020 than in 2016. How does the left, or these marchers specifically, explain that phenomenon? Surely, it’s not a matter of women voting subserviently based on their husbands’ preferences; that would be anti-woman to suggest females cannot make up their own minds.

As his tenure unfolded, Trump continued to permit women to hold estimable positions within his administration. For one, when he built out a team it was observed that he had more women in the role of senior advisor than had Barack Obama. In fact, half of his entire team comprised women, reflective of the demographics of the nation he was leading. Political affiliation aside, he even tapped Betsy DeVos and Elaine Chao to head the Departments of Education and Labor, respectively. Nikki Haley led the delegation to the United Nations.

His party provided a national platform at the Republican National Convention to showcase women in the party doing tremendous work. The aforementioned Haley was a premier speaker. She said:

“This is personal for me. I am the proud daughter of Indian immigrants. They came to America…

How Faulty Camera Focus Leads to a Deadly Form of Projection

Tucker Carlson: Yes, the election was rigged for Joe Biden. Here’s how