It was a race against time — a woman in Taiwan rushed a female colleague to hospital after she fainted at work. Two minutes into the journey, the latter wasn’t breathing and her heart stopped beating.

Without access to an automated external defibrillator (AED), the woman, surnamed Chu, spent 15 minutes performing cardiopulmonary resuscitation (CPR) on her colleague during the incident which happened in September, Taiwan media reported.

“I did chest compressions until I was exhausted, but I persisted because I wanted to save her,” Chu wrote in a Facebook post on Tuesday (Nov 24), adding that she had accompanied her colleague because she had emergency medical technician certification.

She managed to resuscitate the ailing woman.

Instead of thanking her for saving her life, Chu’s colleague texted her in October, questioning how she sustained wounds on her chest and arm.

In their exchange, her colleague attached a photo of a bruise on her chest, saying: “How much strength did you use? My wound is very big.”

Ticked off by her accusatory tone, Chu replied: “Are you blaming me for exerting too much strength during CPR?”

She was lucky she didn’t suffer broken ribs from the procedure, Chu added.

Her colleague also told her that as a person with diabetes, she was concerned about the wounds getting infected and potentially leading to amputation.

But between her life and those bruises, Chu posed the question — which is more important? 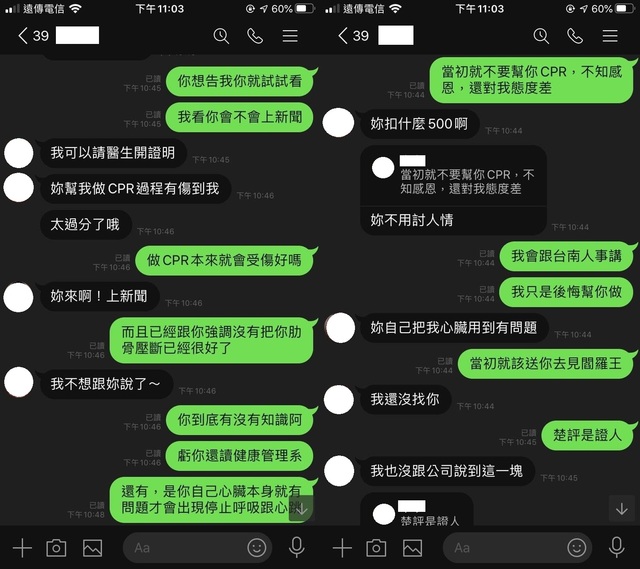 Adding fuel to the fire, her colleague allegedly threatened to take legal action against her: “You pressed on me so hard that I have heart problems. I can get a doctor to prove that you injured me during CPR.”

Enraged, Chu aired her grievances on Facebook this week, saying that if her colleague really sues her, everyone in the country should forget about picking up first aid skills since some people are so ungrateful for the help rendered.

Her post sparked intense debate among netizens, with many taking her side.

Several netizens with first aid experience chimed in, saying that injuries such as bruises or broken ribs are common because hard and fast chest compressions are required when administering CPR. 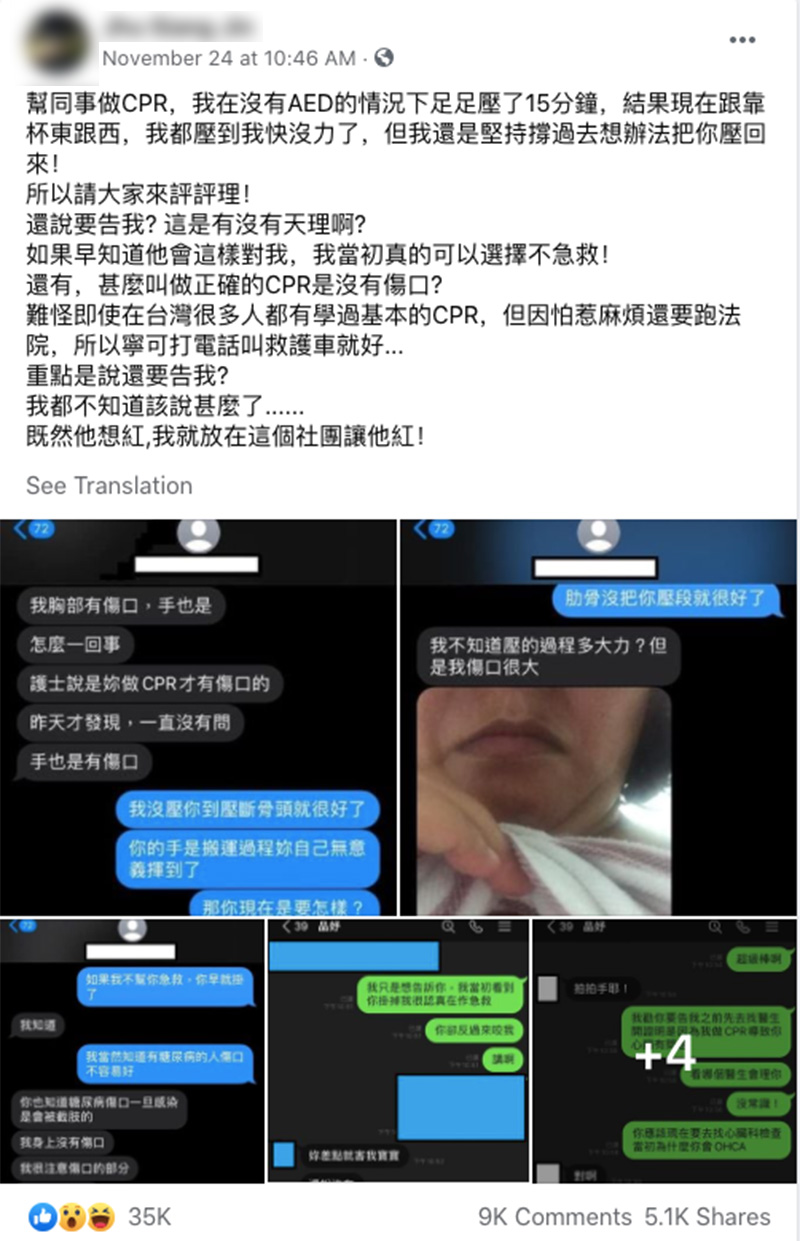 Under Taiwan’s Emergency Medical Services Act, those using emergency rescue equipment or performing first aid to save others suffering life-threatening conditions will not be liable for indemnification.

Last year, Taiwan announced that it is looking into installing more AEDs in public as well as educating more people on how to use them in order to reduce deaths from heart attacks.

According to an emergency department physician at National Taiwan University Hospital, a heart attack victim’s chances of survival increase by 50 per cent if he or she is defibrillated or receives CPR immediately.

KUWTT: Biden in, Trump out