England striker Danny Ings, 28, has been urged to commit to a new long-term contract at Southampton by his manager Ralph Hasenhuttl. (Sky Sports)

Tottenham midfielder Harry Winks, 24, could seek a move in January to enhance his England claims before the European Championship. (Mirror)

Manchester United have made contact with the representatives of Barcelona’s France forward Ousmane Dembele, 23, over a January transfer. (Mundo Deportivo, via Manchester Evening News)

Manchester United are hopeful of obtaining a work permit for Atalanta’s Ivorian winger Amad Diallo so the 18-year-old can join the club in the January transfer window. (Manchester Evening News)

Ole Gunnar Solskjaer has rejected claims his Manchester United team are inconsistent and insists his new signings will help the side evolve. (Sky Sports)

Manchester United could move for Paris St-Germain boss Thomas Tuchel if they sack Solskjaer in the next few weeks. (Bild)

Arsenal’s players exchanged angry words in a clear-the-air meeting after manager Mikel Arteta called the squad together to identify reasons behind their poor start to the season. (ESPN)

William Saliba’s Arsenal future remains uncertain as the player and club are yet to agree where the 19-year-old French midfielder should move on loan. (ESPN, via Express)

Tottenham and England defender Eric Dier, 26, admits he was ready to leave the club before his switch to the heart of defence. (Mail)

Former Juventus and AC Milan manager Massimiliano Allegri says he wants to manage in the Premier League. The 53-year-old, linked with Manchester United and Arsenal, has been without a club since leaving Juve in the summer of 2019. (Times)

Everton manager Carlo Ancelotti has explained what he expects from Cenk Tosun and suggested the Turkey striker, 29, could have more minutes on the pitch in the near future. (Liverpool Echo)

QPR boss Mark Warburton has indicated he will not look to bring in a striker during the January transfer window and is instead focused on a centre-back. (West London Sport)

Pep Guardiola is hopeful that club captain Fernandinho, 35, the Brazil midfielder out of contract at the end of the season, will play a major role for Manchester City between now and next summer. (Manchester Evening News)

Manchester United are hoping to get approval to welcome back fans to Old Trafford for their Premier League game against Leeds later this month. (Telegraph)

Tottenham are seeking clarity as to why a blanket figure for supporter capacity is being applied to all sporting venues, regardless of their size. (London Evening Standard) 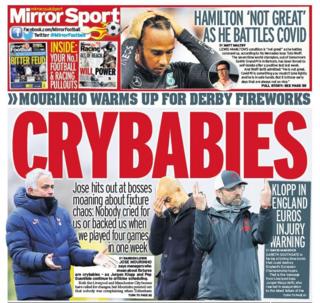 Bobby Jindal: Biden may find support for some proposals among populist...

Capmocracy - January 17, 2021 0
When Treasury Secretary Steve Mnuchin said "now is not the time to worry about shrinking the deficit," during fall negotiations with Congress over...