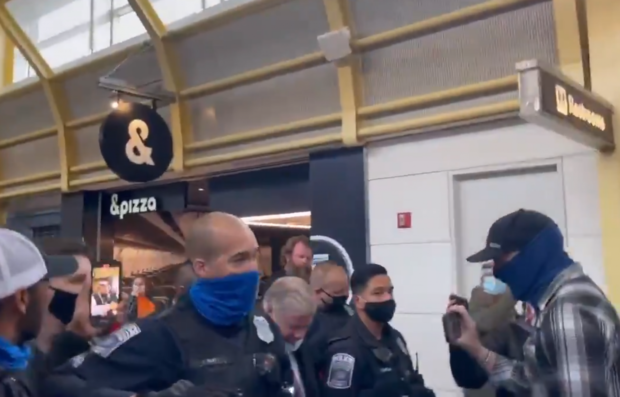 Video footage Mindy Robertson tweeted appears to show law enforcement escorting Graham through the airport as a crowd seems to be harassing and following the South Carolina senator.

Lindsey Graham just made the mistake walking by me and a mass of angry patriots at the airport in DC.

All America wants is for you to AUDIT OUR VOTE and purge this election of this massive corruption…and you won’t do it. We’re not letting this “slide” so expect more of this. pic.twitter.com/pbemr2Gcr9

“You know it was rigged, you garbage human being. It’s gonna be like this forever wherever you go for the rest of your life,” the woman said during the video.

Hundreds of rioters stormed the U.S. Capitol building during a march against the Electoral College’s certification of the presidential election results on Wednesday. Capitol hill staffers were reportedly told to evacuate due to a suspicious package.

Graham, who has been a supporter of President Donald Trump, said Wednesday that he couldn’t object to the election results certification with some of his.

During the airport incident, a woman yelled “audit the vote” a few times, and called Graham a “piece of shit,” the video shows. Robinson tweeted that Graham missed his flight.

“You son of a bitch. You better join Gitmo. Fucking asshole. Piece of shit,” the woman in the video said.

A source sends this video of a group of Trump supporters today harassing Sen. Lindsey Graham at Reagan airport and loudly calling him a “traitor” after he publicly broke with Trump earlier this week. pic.twitter.com/XBF8K6DIUD

Sanders turns up heat on Manchin, Sinema with tweet on voting rights bills