The representatives of Manchester United and England midfielder Jesse Lingard, 28, have held initial discussions with Nice over a loan move, with an official approach expected in the next week. (Sky Sports)

Newcastle United boss Steve Bruce retains the support of owner Mike Ashley, despite fans calling for him to be sacked following the midweek defeat by Sheffield United. (Sky Sports)

Wolverhampton Wanderers manager Nuno Espirito Santo’s agent is looking for a new Premier League club for the Portuguese, who signed a new deal at Molineux in September.(Sun)

Arsenal’s former Germany midfielder Mesut Ozil, 32, has offered to forgo some of the £7m he is due to earn before the end of the season so he can cut his contract short and leave this month. (The Athletic – subscription required)

Manchester City and Spain defender Eric Garcia, 20, has agreed personal terms with Barcelona, but a transfer is some way from completion. (Goal)

Tottenham manager Jose Mourinho insists England midfielder Harry Winks, 24, will not be sold or leave the club on loan this month. (Football London)

Everton defender Jonjoe Kenny could leave in the January transfer window, with Burnley interested in the 23-year-old Englishman. (Liverpool Echo)

AC Milan have had talks with the agent of former Juventus striker Mario Mandzukic over a move for the 34-year-old Croat, who is available on a free transfer.(Football Italia)

Celtic and Rangers both want Liverpool’s 23-year-old Nigerian forward Taiwo Awoniyi, who is on loan at Bundesliga side Union Berlin. (90 Min)

Former Arsenal and West Ham midfielder Jack Wilshere, 29, has impressed Bournemouth boss Jason Tindall and the Englishman could earn a short-term contract with the Championship side. (Mail)

English winger Jack Clarke, 20, is set to finalise a loan move from Tottenham to Championship side Stoke City. (Football London)

Forward Cengiz Under is playing for his Leicester City future, with the club to assess the 23-year-old Turkey international’s impact at the end of the season. (Leicester Mercury)

Derby County could be forced to sell the likes of Republic of Ireland midfielder Jason Knight and England Under-19s midfielder Louie Sibley, both 19, to raise money for their delayed wages.(Sun)

Brighton’s 20-year-old English defender Alex Cochrane, who is on loan at Belgian second division side Union St Gilloise, is a target for Sunderland. (The Argus)

Middlesbrough have recalled Stephen Walker from MK Dons and could allow the 20-year-old English striker to join another club on loan before the end of January. (Hartlepool Mail) 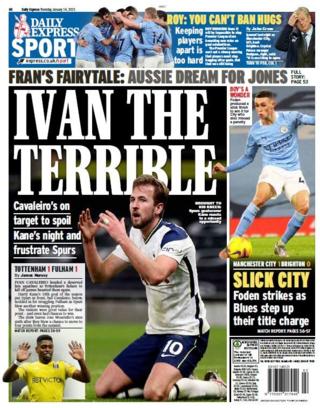 ´Humiliation´ for Real Madrid as Zidane needs ´miracle´ to survive

Capmocracy - January 21, 2021 0
"Garage kept" may be great for classic cars -- but for National Guard members it may be disrespectful.Reports of shabby treatment of National...
Opinion

Capmocracy - January 21, 2021 0
Thursday was Joe Biden's first day in office. You can tell a lot about what people value on their first day in any job,...