AC Milan want an option to buy Chelsea and England centre-back Fikayo Tomori if they sign him on loan this month. The Italian side would pay about £26m for the 23-year-old. (Guardian)

Chelsea’s English midfielder Danny Drinkwater, 30, is about to sign a loan deal with Turkish side Kasimpasa, having struggled at Stamford Bridge since his £35m move from Leicester in 2017. (Mail)

Tottenham and England defender Danny Rose, 30, is set to snub West Brom in favour of a move overseas after falling out of favour at the Tottenham Hotspur Stadium. (Sun)

The three Barcelona presidential candidates have agreed to delay the election from 24 January to 7 March after new Covid-19 measures were introduced to the region. (AS)

That delay could mean Barcelona may have to wait until Garcia’s contract expires in the summer to sign him, with the club also unable to afford a transfer fee for their former academy player in January. (Marca)

Bayern Munich have approached Real Madrid about signing Brazil defender Eder Militao, 22, as a potential replacement for Austria left-back David Alaba, 30, who seems to be on the verge of joining the Spanish side. (Goal)

Atletico Madrid manager Diego Simeone is keen on a move for Arsenal and France forward Alexandre Lacazette, with the 29-year-old’s relationship with Gunners boss Mikel Arteta under strain. (AS – in Spanish)

There are three contenders to sign Arsenal striker Folarin Balogun, 19, on a pre-contract agreement this month, though the Gunners still hope the English forward changes his mind and decides to sign a new deal. (Guardian)

Everton are interested in a loan deal for Bayern Munich’s 19-year-old Dutch striker Joshua Zirkzee, with a possible option to buy. (Mail)

Championship side Bournemouth are ready to offer former Arsenal and West Ham midfielder Jack Wilshere, 29, a contract. The England international has been training with the Cherries for the past three weeks. (Talksport)

Marseille are in talks with Napoli over a deal for 26-year-old Poland striker Arkadiusz Milik, who is also wanted by Juventus and Atletico Madrid. (Goal)

West Brom are interested in a deal for Galatasaray and Senegal striker Mbaye Diagne, 29. (Sky Sports) 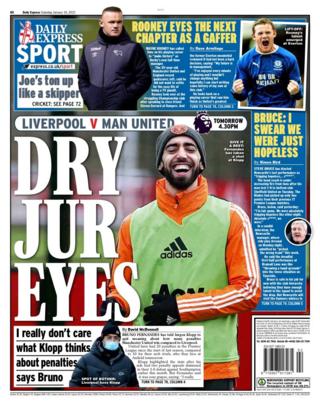