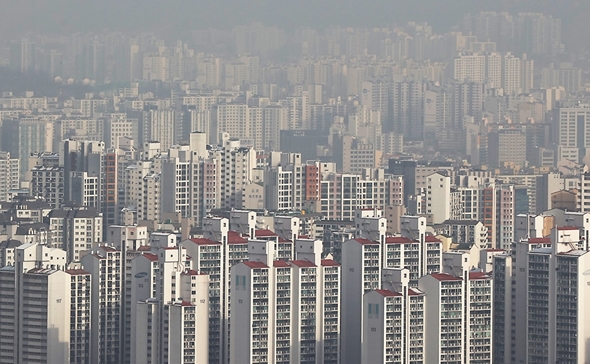 Finance Minister Hong Nam-ki said housing stability is one of the government’s most pressing tasks, vowing to make use of all available policy measures to rein in the heated market.

“The government will put priority on supplying new housing units this year,” Hong said at a pan-governmental meeting on the real estate market.

To speed up new projects, the Ministry of Land, Infrastructure and Transport selected eight areas in Seoul for pilot redevelopment projects pushed with public developers, including the state-run Korea Land and Housing Corp. and Seoul Housing Communities Corp.

While redevelopment projects often get delayed due to layers of regulations and the difficulty of achieving consensus among existing residents and stakeholders, public developers’ participation in the projects will help accelerate the process and reduce uncertainty, the land ministry said.

If the projects go smoothly, about 4,700 homes will be additionally supplied in the capital, the ministry said.

The urban redevelopment project is part of the government’s broader plan to pump up supply in the broader Seoul area, home to nearly half of the nation’s 52 million population.

In August 2020, the government said it will add 132,000 houses in the Seoul metropolitan area by 2028, including 330,000 units in the capital by developing land owned by the military and public organizations.

Separately from the supply plan, Hong said the government will go ahead with imposing higher property-related taxes as planned, dashing hopes for an eased property sales tax rate to prompt multiple homeowners to sell their houses.

“The government has an unwavering commitment to curbing speculative property demand. It will sternly implement policy packages, such as measures to strengthen the related taxes and regulate liquidity,” Hong said.

South Korea’s soaring housing prices have showed no signs of a letup despite the government’s efforts to stabilize the real estate market, including tax hikes and loan regulations. Prices of houses for rental recently spiked as supply dried up.

Home prices in South Korea rose at the fastest pace in nine years in 2020 with a 5.36 percent on-year surge, according to the data from the Korea Real Estate Board, amid low interest rates and ample market liquidity.

In his New Year’s message, President Moon Jae-in apologized for the property market problem. Skyrocketing home prices are viewed as one of the main factors that drove the approval ratings for Moon to the lowest point since he took office in May 2017. (Yonhap)

Will BlackRock divest from Kakao over ESG issues?