THOUSAND OAKS, Calif. — A black Range Rover pulled into the Four Seasons at 4:58 in the morning, and Brandon Staley climbed in.

The driver was Los Angeles Rams coach Sean McVay, and he was there to pick up the rather anonymous Denver Broncos outside linebackers coach to interview to be his defensive coordinator, replacing the legendary Wade Phillips.

The interview began immediately along the 10-mile drive to the Rams’ practice facility, where Staley — who came highly recommended from McVay’s inner circle — really dove in.

“When you talk football — I’d like to think that I love football as much as anybody — you’re sitting there and you’re thinking, ‘This guy might be sicker than I am,'” McVay said about Staley.

Staley, who turned 38 last month, loves two things most: his family and football. He and his father are cancer survivors, but he watched the disease take his mother’s life after nine years. He has taken a somewhat unconventional path to the NFL, but every stop — from playing quarterback at Dayton and Mercyhurst, to coaching at Hutchinson Community College and serving as an NFL position coach for three seasons — served a purpose in shaping him and the NFL’s best defense.

Since McVay’s arrival in L.A. four years ago, the Rams’ identity has been tied to his high-scoring offense. But this season is different. And that difference began during a 12-hour marathon interview McVay and Staley admit flew by and could have lasted longer.

Staley pored over his plans for the Rams’ defense, utilizing the blueprint he created at John Carroll University, a Division III school in Ohio where he served as defensive coordinator for the Blue Streaks four seasons earlier and developed a top-ranked unit.

Staley brought up Frank Pines, an undersized lineman for the Blue Streaks who he called a force of nature who could play anywhere along the defensive front.

Pines’ role would be filled by Aaron Donald, the Rams’ two-time NFL Defensive Player of the Year.

Then there was Jovon Dawson, an athletic defensive back who could play safety, corner and nickel, a skill set so grand an entire defense could be built around him.

Staley knows it sounds like a stretch, walking into his only formal interview for an NFL coordinator position and bringing up D-III players — guys who paid to play in college, that no one ever heard of.

Even his former players got a good laugh when they found out their names were mentioned.

• Move that helped each playoff team get here
• Brady, Brees reflect on four-decade rivalry
• How Bills fans find ways to watch game
• Lamar has MVP, could Allen be next?
• Best bud battle: McVay vs. LaFleur

“I couldn’t hold Jalen Ramsey’s jockstrap!” said Dawson, who is 25 and works for a family business.

“That’s just crazy that he said that,” said Pines, 27, now a territory manager for US Foods. “It’s kind of weird to be compared to the best defensive player in the NFL.”

But to Staley, the analogy played perfect.

“The biggest point was that we were going to take advantage of our personnel,” he said. “I was able to articulate that clear vision because I had done it before.”

Now Staley, whose defense can stifle any quarterback, create turnovers and consistently score, is heading across town to become the head coach of the Los Angeles Chargers.

“He’s a great coach, one of the best coaches that I’ve ever had,” Ramsey said. “I feel like he’s a genius.”

John Carroll was undefeated in 2013 and preparing for a big, early November game against a physical Heidelberg University team that had blown them out a year before.

The tension in the room felt palpable, and Staley — the typically serious and focused first-year coordinator — knew the moment called for a different approach.

“He looks at us,” Pines recalled, “and says, ‘You know what song really pumps me up?'”

A smooth melody filled the room, the song “Royals” by Lorde playing, and the rather stiff Staley began to groove.

“He’s like, ‘This is how you gotta be, baby! Smooth like chocolate milk!'” Pines said, chuckling. “It gives me goosebumps just thinking about it.”

“That was absolutely the moment where I always look to like, where did the John Carroll defense change?” said Chris Rizzo, another former Blue Streak. “It was that moment in that room.”

At John Carroll, Staley grew a reputation for loving onion rings with hot wings, guzzling coffee and spinning his wedding band around his ring finger when his mind went into overdrive.

He demanded a lot from players, but they respected it. In his first season, he installed a defense that served players’ strengths and turned a cellar-dwelling unit into a top-ranked defense among 250 Division III teams. In Staley’s final season in 2016, the Blue Streaks were crowned conference champions.

Former John Carroll head coach Tom Arth, who is now head coach at Akron, knew within moments of meeting Staley that he would hire him. Staley was coming off a one-year stint as a graduate assistant at Tennessee, preceded by a two-year stay at Hutchinson Community College, where he was defensive coordinator.

“Within the first minute of his starting to talk some football, I just knew he was different,” Arth said. “There’s no other candidates after you meet Brandon.” 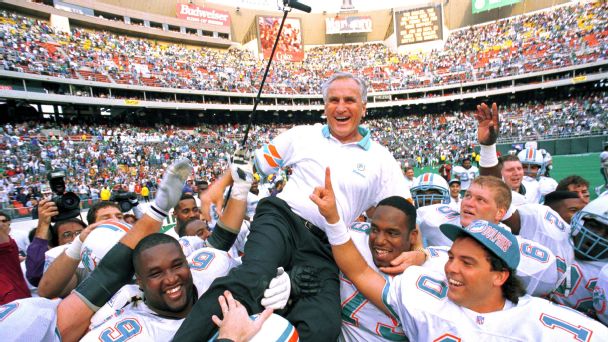 Brandon Staley isn’t the first coach to come from Division III John Carroll, which has been an unlikely source for coaches, personnel executives and players. Here are several notable Blue Streaks alumni.

Staley encompassed everything Arth wanted: passion, combined with an ability to communicate, teach and quickly earn trust. Plus as a former college quarterback, Staley sees the game from an all-22 perspective, with a deep knowledge for how each side of the ball works.

“Brandon is the same monster with two different heads,” Rizzo said. “He’s got his coaching head and then he’s got his personality, his person head.”

Staley understood how to reach every player, which meant finding ways to relate and communicate with each individual, a trait that caused Dawson to smile this year when he heard Ramsey echo the same sentiment to reporters.

“That’s one of the special things he does,” Dawson said. “I was a super emotional player, I didn’t enjoy being talked to aggressively, so would always pull me to the side. … [Other guys] had to be yelled at because that’s the only way they took coaching.”

Former Blue Streak Brody Zangaro recalled Staley telling players who missed assignments that he would put them on waivers.

“There are no waivers in Division III football,” Zangaro laughed. “This is sort of a testament to him knowing that he would be in the NFL.”

Jalen Ramsey isn’t easily won over, so when the All-Pro cornerback offers praise, it means something.

“The way he’s opened up the defense and built it around A.D. as it should be — it’s all things that you would think common sense,” Ramsey said, “but the way that he does it is extraordinary.”

Staley kept the base 3-4 defense installed by Phillips, but added elements he learned under Broncos coach Vic Fangio as well as wrinkles of his own style. His goal is to create one-on-one matchups in the run game and two-on-one matchups in the passing game. He does it by utilizing the individual strengths of his players.

“When Brandon came in, there was a clear-cut vision for all of our players and how he saw the ability to accentuate their skill sets,” McVay said.

But perhaps most important to Staley is the production of players not named Donald or Ramsey, who always are expected to produce at a high level.

“When I came here I really wanted to establish that we were a team defense,” said Staley, who remodeled the defense without OTAs or a traditional preseason. “I think that’s what we got done.”

Staley revived the career of outside linebacker Leonard Floyd, whose production in Chicago stalled in four seasons but took on new life in L.A. with…

Capmocracy - April 17, 2021 0
Executive orders! Mask Mandates! COVID Lockdowns! Will we lose our country? In a few years, will we even recognize our country? Many people...
Entertainment

Capmocracy - April 17, 2021 0
At one point in time, Americans were rugged individuals who thought for themselves. Today, well…. “I’m a Marine so I’m not really worried about anything....