When things are bad, it often seems like the end of the world; when they’re good, it feels like the party’s never going to end.

There’s an old saying, “make hay while the sun shines,” meaning that you should make the most out of your opportunities while they last. The adage is particularly relevant to our financial markets of late, as it seems investors have been taking it quite literally over the course of the summer. Even as markets across the board were falling following the worldwide spread of the coronavirus, the urge to find the right dip to buy became ever harder to resist. At the time, with flu season out of the way (at least in the northern hemisphere), we witnessed a powerful recovery as well as an increase in confidence that the worst was behind us, that a vaccine was just around the corner, and that a full return to growth was on the cards for 2021.

Of course, collective sentiment tends to overshoot on both the upside and the downside. When things are bad, it often seems like the end of the world; when they’re good, it feels like the party’s never going to end. What we seem to be witnessing now is a moment of collective sobering up. Winter is coming, COVID-19 cases are on the rise again, further lockdowns appear to be in store, and investors don’t want to be caught wrong-footed like they were back in March.

Following the slump in US equities that we saw in early September from their all-time highs, the S&P 500 has attempted to bounce, stalled at the 3422 level between September 8-10, unsuccessfully retested the same level between September 15-16, and has since set a new lower-low at around 3230. We’ve seen the Dow Jones Industrial Average and Nasdaq do much of the same thing, with the S&P 500 and Nasdaq recently hitting levels last seen in July, and the Dow Jones since early August. On Monday, September 21, for the first time since February, the S&P 500 posted losses on four consecutive days. It ended around 10% down from the record high the index set on September 2. 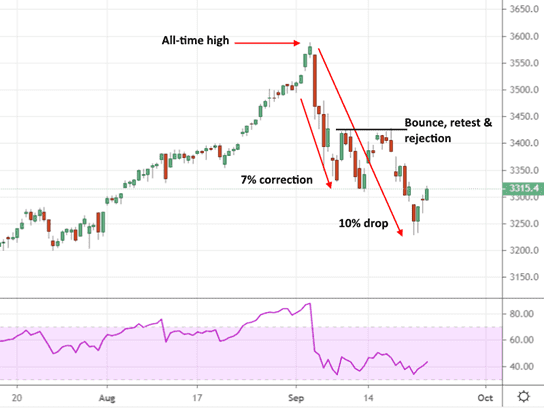 As is routinely the case, each bounce is met with a great deal of fanfare. The S&P 500 is currently up around 2.9% off those lows, but there could be further selling in store. The attempted bounce we’re seeing is currently being led by tech giants Amazon and Apple. The other usual subjects in the technology space (Microsoft, Alphabet and Facebook) have, in combination, fuelled the US stock market’s improbable post-COVID-19 rally and have also posted slight gains since the sell-off.

What we’re seeing now is a period of coming back down to earth and a tentative recognition that perhaps stocks rallied too hard through the summer to become overpriced relative to the risks. The first of the unknowns weighing on investors’ animal spirits is whether Congress will approve further stimulus measures before the November election. This was echoed by Fed chairman Jerome Powell, who has publicly called for further fiscal support from the government. With the unemployment benefits and other stimulus measures of the CARES Act having recently expired, the big question on everyone’s lips is whether a deadlocked Washington will manage to put together another package.

US-China tensions are also continuing to rise with President Trump gunning for the Chinese tech platforms. Citing data privacy and national security concerns, the US Department of Commerce has recently launched a series of measures that will severely curtail the US activities of Chinese tech companies like TikTok and WeChat.

In other news, the recent death of Supreme Court Justice Ruth Bader Ginsberg has added further tensions in an already fraught election run-up as Republicans and Democrats begin an acrimonious battle…