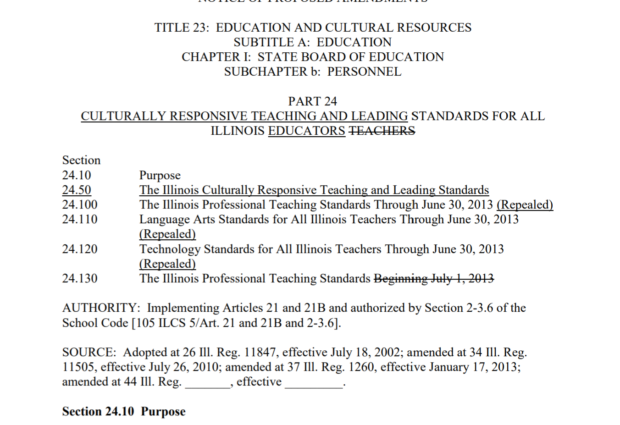 Beginning in October, all Illinois teacher training programs must start to reflect the new standards that focus on “systems of oppression,” with teacher trainees required to “understand that there are systems in our society that create and reinforce inequities, thereby creating oppressive conditions.”

Under the new standards, all teachers-in-training are also expected to “explore their own intersecting identities,” “recognize how their identity…affects their perspectives and beliefs,” “emphasize and connect with students about their identities,” and become “aware of the effects of power and privilege and the need for social advocacy and social action to better empower diverse students and communities.”

Even the Chicago Tribune editorial board warned against the passage of these standards in the days preceding the legislative session, noting that “while the rule-writers removed the politically charged word ‘progressive’ from their proposal, there’s no doubt these are politically progressive concepts as we know them in our current national dialogue. If the rules were tilting more toward traditional concepts of teaching, if the word ‘conservative’ were peppered throughout the rules, you can imagine the uproar.”

The Tribune editors also acknowledged the “real concerns” critics have expressed toward these standards.

“Teachers could be evaluated on how sensitively they meet students’ needs, how engaged they become in political causes, rather than how much their students understand basic reading, writing and critical thinking — must-have skills to prepare any student for life,” wrote the editorial board on February 15.

The Illinois action is one example of an accelerating trend toward introducing and elevating critical theory ideology throughout US institutions, including government schools.

As Helen Pluckrose and James Lindsay write in their book Cynical Theories: How Activist Scholarship Made Everything About Race, Gender, and Identity—And Why This Harms Everybody: “A critical theory is chiefly concerned with revealing hidden biases and underexamined assumptions, usually by pointing out what have been termed ‘problematics,’ which are ways in which society and the systems that it operates upon are going wrong.”

Pluckrose and Lindsay trace the evolution of critical theory over the past half-century, from its emergence in academia to its growing influence in culture and public policy. They argue against its “illiberal” foundations that prioritize the group over the individual and that often silence free expression and dissent.

“In the face of this,” the authors write, “it grows increasingly difficult and even dangerous to argue that people should be treated as individuals or to urge recognition of our shared humanity in the face of divisive and constraining identity politics.”

The emphasis on identity politics rooted in critical theory is increasingly driving education policy, such as the new Illinois teacher standards as well as the continued push for a new high school “ethnic studies” graduation mandate in California. But it’s not just government schools that are affected by these policies.

In December, the Dalton School, a pricey New York City private prep school, made headlines when an 8-page manifesto was released demanding more attention to an “anti-racist” agenda, including hiring at least 12 “diversity and inclusion” staff members, compensating Black students who engage in antiracism activities or have their photos used in school materials, redistributing half of the private donations to Dalton toward New York’s public schools, and requiring “courses focusing on ‘Black liberation and challenges to white supremacy’ and ‘yearly anti-racist training’ for not only employees but trustees and Parent Association volunteers.”

Some parents of Dalton students removed their children from the school, including one father who told the New York Post: “It’s completely absurd and a total step backwards. This supposed anti-racist agenda is asking everyone to look at black kids and treat them differently because of the color of their skin.”

The same choice of exit should be open to more families who are disillusioned by what they see happening in their children’s schools. The school shutdowns and related remote learning plans implemented over the past year have given parents an unprecedented look at what their children are, or are not, learning in their schools. Many parents feel a renewed sense of empowerment and have left their district schools for private education options, including independent homeschooling which has more than doubled during the pandemic response. Other parents may want to leave their district school but lack the resources to do so.

Support for education choice policies that expand learning options for families has grown during the school shutdowns. A fall RealClear Opinion Research survey revealed that 77 percent of respondents are in favor of funding students over systems, up from 67 percent last spring.

Twenty-six states now have active legislative proposals to expand education choice and allow funding to follow students. Illinois is one of these states, with a proposal to create an education savings account program for income-eligible families that enables a portion of per pupil funding to go directly to families for approved educational expenses.

The Nobel Prize-winning economist, Milton Friedman, was an early and enthusiastic advocate of education choice policies. “If present public expenditures on schooling were made available to parents regardless of where they send their children, a wide variety of schools would spring up to meet the demand,” Friedman wrote in his book, Capitalism and Freedom. “Parents could express their views about schools directly by withdrawing their children from one school and sending them to another, to a much greater extent than is now possible.”

Parents may decide to remove their child from an assigned district school for a variety of reasons, ranging from academics to student well-being to ideology. As states like Illinois continue to push their educational institutions toward a more progressive ideology, rooted in critical theory, parents who disapprove of this ideology should have the choice and opportunity to exit in favor of other options.

“Liberalism values the individual and universal human values,” write Pluckrose and Lindsay in Cynical Theories. “Theory rejects both in favor of group identity and identity politics.”

Families that value liberalism over critical theory should be free to choose different educational options, and taxpayers who value the same should choose their legislators wisely.