The rally in oil prices has all but expunged any likelihood that Saudi Aramco will fail to meet its $75 billion dividend payout next year, according to Bank of America Corp.

Far from missing the payment, the company may even boost it in 2022 as it increases production and benchmark crude prices head back toward $70 a barrel, the bank said.

Aramco’s pledge to pay an annual $75 billion to shareholders during its first five years as a publicly traded company was thrown into doubt last year as oil tumbled amid the Covid-19 pandemic, prompting the company to slash spending and increase borrowing. It also put an additional strain on Saudi Arabia’s finances. The government, which owns 98 percent of Aramco after selling shares in a December 2019 initial public offering, has depended on the dividend to help plug its budget deficit. 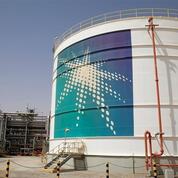 “Aramco would be well-placed to implement its higher dividend distribution guidance given during the IPO and even increase dividends beyond its minimum $75 billion pledge,” Bank of America analysts including Houston-based Doug Leggate and Karen Kostanian in Moscow said in a report. “Aramco is one of the few companies globally that can substantially boost output without committing additional capex.”

Saudi Arabia, the world’s largest crude exporter, is benefiting as oil rebounds from last year’s slump amid OPEC+ production limits and signs of a global economic recovery. Brent, a benchmark for more than half the world’s oil, jumped 4.9 percent last week to $69.36 a barrel as of Friday, its highest close in almost two years.

The potential for higher dividend payouts is already priced into Aramco’s stock, according to Bank of America, which left its target for the shares unchanged at 35 riyals. The shares rose as much as 2.3 percent to 36 riyals in Riyadh on Sunday. They have gained 2 percent this year.

The bank’s report was published on Thursday, before a decision by the Organization of Petroleum Exporting Countries and partners like Russia to continue with its policy of supply restraints, which gave a further boost to prices.

Saudi Arabia also said last week it would delay by an extra month plans to start returning 1 million barrels a day to the market, which gave a further boost to prices.

Capmocracy - December 7, 2021 0
I came across this tweet today from pundit Elisha Krauss and it got me thinking. We had two fireplace/chimney experts over at our house...
Opinion

Capmocracy - December 7, 2021 0
NEWYou can now listen to Fox News articles! This year, 2021, has been a record-breaking one in many ways, and unfortunately, according to Freedom...