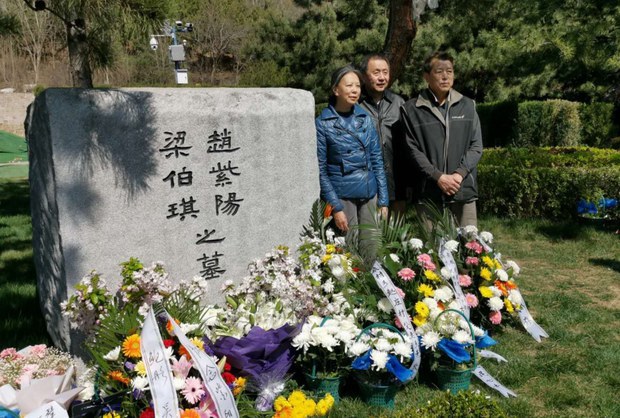 The family members of late ousted Chinese premier Zhao Ziyang paid their respects at his grave on the outskirts of Beijing on Sunday, with tight security ensuring that nobody else could enter the private cemetery where his ashes are interred, RFA has learned.

Zhao’s son Zhao Erjun and daughter Wang Yannan, along with more than 20 friends and relatives, laid floral wreaths and other offerings at the site in a brief ceremony lasting just 20 minutes during the traditional grave-tending festival of Qing Ming.

The former premier’s ashes were interred along with those of his wife Liang Boqi at the private  Tianshou Garden cemetery in the Beijing satellite town of Changping in October 2019, after being kept at Zhao’s family home at No. 6, Fuqiang Alley in Beijing since his death on Jan. 17, 2005.

Zhao died at his courtyard home after 16 years under house arrest following his ouster in the wake of the 1989 Tiananmen massacre by the People’s Liberation Army (PLA) that ended the student-led pro-democracy movement that had occupied Tiananmen Square for several weeks.

The house is now occupied by Wang Yannan and her family.

Political journalist Gao Yu said Wang and her family are being put under huge pressure to move by the General Office of the ruling Chinese Communist Party (CCP).

“Finding them a new home isn’t an easy task, and the administration is making arrangements,” Gao said. “But they are likely to be living alongside other senior officials if they do move.”

“If they move them into private accommodation, then it’ll be logistically much harder to keep an eye on them,” she said.

“Last I heard, they had already started packing.”

The residence is currently home to a number of politically sensitive items — mostly memorabilia of Zhao and his time in office, as well as his private collection of books and documents, Gao said.

The family has been given until July 1 to leave, coinciding with the centenary of the CCP’s founding, she said.

“It doesn’t look great, forcing a former CCP general secretary out by the centenary,” she said. “The whole thing has been bound up with the Tiananmen massacre for so many years; people around the world want to know why Zhao was against opening fire [on protesters] and how he hoped to address the issue of the student movement and demands for democracy and the rule of law.”

“This settling of scores old and new is fundamental to the 100th anniversary; it’s just not being spoken about,” Gao said.

Former 1989 student leader Ji Feng, who is acquainted with Zhao’s family, said the authorities want Zhao’s relatives out of his former residence, which has become a focal point for people who remember the former premier with pride and affection, as well as for those who want democracy and the rule of law in China.

“This has become a place where memorials take place; year after year, petitioners, rights activists and other mourners will turn up there,” Ji said.

“The authorities don’t want this leading to avoidable trouble, so they are treating it like the grave of [Mao-era dissident] Lin Zhao,” he said.

Ji said the house was originally allocated to Zhao and his family after his fall from power, and that his family have no legal right to inherit it.

“There is no way the authorities will turn it into a a memorial hall to Zhao Ziyang, not unless he gets rehabilitated in a few years’ time anyway,” Ji said.

He said it is common practice for the state to repossess property allocated to leaders after they die.

Prior to his ouster for showing sympathy with the student protesters, Zhao was a liberal-minded and well-loved leader who rose to the top of the ruling party at the 13th Party Congress in 1987.

His name rarely appears in the official record, although he has a loyal following of former officials seeking to rehabilitate him as a figurehead of the reform era that began in 1979.

In a conclusive break with the reformist thinking of the 1980s, China’s current supreme leader Xi Jinping is now serving an indefinite term as president following constitutional changes nodded through in March 2018 by China’s rubber-stamp parliament, the National People’s Congress (NPC).

Commentary: Why many under 45 are hoping vaccination slots open in June