Tottenham Hotspur boss Jose Mourinho is planning a possible reunion with Belgian midfielder Marouane Fellaini by bringing him to Spurs. The 33-year-old, who worked under the Portuguese manager at Manchester United, has been with Chinese club Shandong Luneng since leaving Old Trafford in February 2019.

Bayern Munich will attempt to bring Liverpool manager Jurgen Klopp to the Bundesliga club in the summer if Hansi Flick leaves to take over as Germany boss. (90mins)

Bayern president Herbert Hainer, however, has said he is “firmly convinced” Flick will remain in charge at Allianz Arena. (Sky Sport Germany, via Goal)

Paris St-Germain have got in contact with Mohamed Salah’s representatives to start talks about a summer move for Liverpool’s 28-year-old Egypt forward. (Telefoot on Twitter – in French)

PSG manager Mauricio Pochettino has approached Tottenham and England striker Harry Kane, 27, about the possibility of a reunion in the French capital. (Telefoot on Twitter – in French)

Manchester United are “obsessed” with signing Villarreal and Spain defender Pau Torres, 24, who is also wanted by Bayern Munich and Real Madrid. (AS, via Team Talk)

Crystal Palace have turned their attention to Marseille winger Florian Thauvin, 28, as it becomes increasingly unlikely they will be able to sign 23-year-old Senegal forward Ismaila Sarr from Watford in the summer. Frenchman Thauvin, however, is already in talks with AC Milan. (Sun)

A summer departure for Edinson Cavani at Manchester United will be complicated by a £2m clause in the Uruguay striker’s contract. The 34-year-old has been strongly linked with a move to Boca Juniors. (Mirror)

Juventus’ talks with 27-year-old Argentina forward Paulo Dybala – who has been linked with Manchester United – remain up in the air because of financial pressures on the Turin club, says sporting director Fabio Paratici. (Sky Italia, via Goal)

AC Milan will not consider selling 21-year-old forward Rafael Leao for anything less than 50m euros. The Portuguese has previously attracted the interest of Everton and Juventus. (Calciomercato – in Italian) 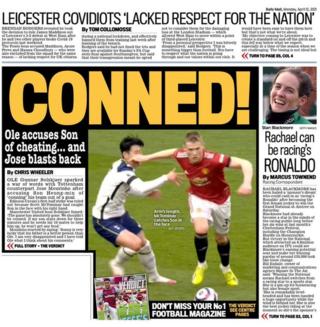