India is fighting a ferocious second wave of the Covid-19 pandemic, with hospital corridors across the country overflowing with patients, as ambulances carrying more sick people wait in long lines outside.

Angry families have been seen fighting over the few remaining hospital beds, while in some areas oxygen has had to be administered to coronavirus patients on the street. 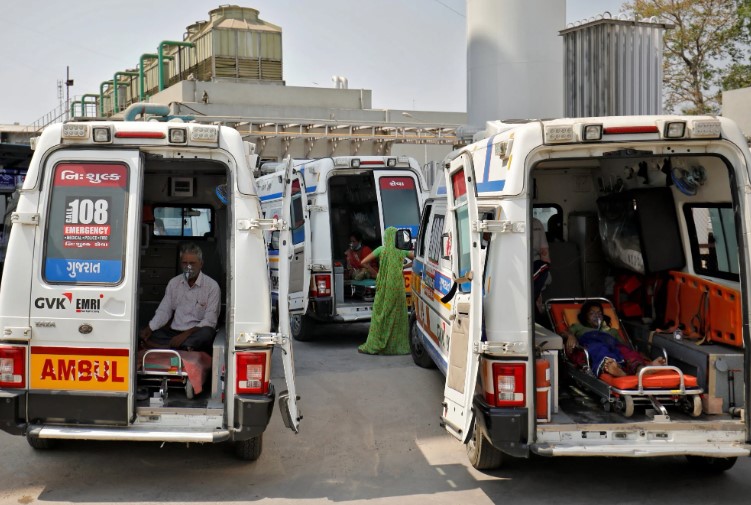 Whatever extra beds and facilities were added last year to cope with the first wave of contagion have been overwhelmed by the more than tenfold spike in case numbers India has seen over the past month.

The country reported a record 184,372 new coronavirus cases on Wednesday, according to health ministry data, bringing the nationwide tally of infections to 13.9 million.

Deaths also rose by 1,027, the highest daily figure since October, raising the nation’s toll since the start of the pandemic to more than 172,000.

In Gujarat, some families have had to wait for eight hours or more in temperatures nearing 40 degrees Celsius to perform last rites for their loved ones, while in Mumbai, a hospital’s reception area was overrun by angry relatives on Tuesday after 10 Covid-19 patients died – allegedly following an oxygen shortage.

Maharashtra state, where Mumbai is located, is the epicentre of India’s second wave – accounting for about a quarter of all the country’s cases. In one district, a woman was photographed hooked up to an oxygen cylinder in an autorickshaw on the street as she waited for treatment.

A full lockdown of the state lasting until the end of April was set to be implemented at midnight on Wednesday to control the spread.

Both private hospitals and government-run facilities are swiftly being overrun. “They just keep coming in,” said one junior doctor at Holy Family Hospital in New Delhi. “The next couple of months, until this wave peaks, are going to be hell.”

The Indian capital alone recorded 13,500 new infections on Wednesday, its highest tally in six months. By lunchtime, 93 per cent of the city’s intensive-care beds with ventilators were occupied, with patients and their relatives seen queuing outside some hospitals.

One woman told a local television news channel that she had not heard anything about her mother since she was admitted to hospital four days ago. “I haven’t got any news at all,” she said. “No one inside is answering the phone. No doctor is coming to the line so I am totally in the dark.”

Amid the surge in infections, Delhi’s government has for the first time ordered 14 private hospitals to only treat Covid-19 patients until further notice – a decision that has outraged those whose relatives need treatment for other conditions.

“My husband was scheduled to have a hip replacement operation next week,” said Neelam Buddhiraj, a retired accountant. “I don’t know what to tell him. What if I fall and break a bone tomorrow? Does the government mean [to say that] no one else matters?”

Dr Girdhar Gyani, director general of the Association of Healthcare Providers (India), said he plans to challenge Delhi’s “absurd” hospital decision in the courts. “What about accident or trauma victims? Stroke victims? Heart attack patients? Treating Covid patients doesn’t require the top level medical expertise of these speciality hospitals where complicated and very advanced surgeries are performed yet you go and block all their beds? I presume it is OK then for stroke or accident victims to die in the cause of saving Covid patients,” he said.

Meanwhile, India’s health care workers are once again succumbing to the virus, with so many medical staff testing positive for coronavirus at one hospital in Madhya Pradesh state that a gardener had to be retrained to collect patients’ nasal and throat samples for testing.

Migrant labourers are also reportedly fleeing the major cities of Mumbai, Delhi and Bangalore, fearing lockdowns that could leave them jobless, homeless and far away from their families.

“I had eight painters working for me who just left abruptly last evening,” said Sambhu Sharma, a building contractor in Delhi. “My clients desperately tried to persuade them to stay – the painting was half-finished and their homes were a total mess – but they were scared about a possible lockdown and not being able to feed themselves.”

In Chhattisgarh state, images broadcast by NDTV showed a hospital corridor lined with Covid-19 victims, some lying on the floor, awaiting their last rites. At a graveyard in Delhi, earth movers have been called in to handle the dozens of bodies that are being brought for burial every day.

While in Surat, western India, the rush of bodies has been so intense at one crematorium that metal structures inside its furnaces have begun to melt from the round-the-clock cremations.

After reporting fewer than 10,000 cases per day earlier this year, India has been the world’s worst-hit country since April 2. The government has blamed the surge in infections on a widespread failure to heed curbs on movement and social interaction.