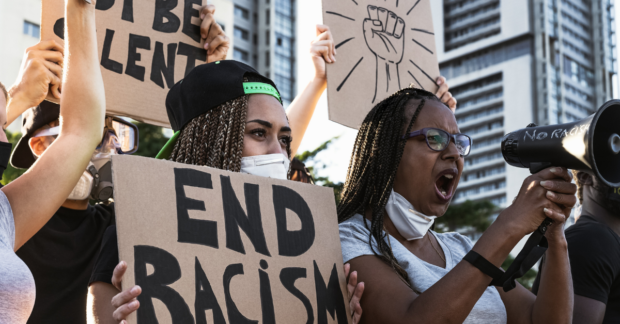 As a Mug Club member, I get to see extended coverage of Steven Crowder’s daily show. However, if you aren’t, you must check out his latest “Change My Mind” installment. “Change My Mind” is a series that allows the viewer to see exactly how the Left thinks about things, especially in terms of the hard-left. In fact, these events are held on a variety of college campuses in the Dallas area. This event took place earlier today on the private institution of Southern Methodist University.

Given, many of the people he interacts with are willing to discuss, learn, and walk away amicably. Every now and again, he’ll get a hard-left loon with the emotional intelligence of a dump truck and equal common sense. All can be interesting, but the latter that gives us a real look into how the hard-left thinks. Moreover, their viewpoints come from a hodgepodge of mishmash data that often provide the hearer the point of view that can only be seen as having a point of view that comes from fantasy land.

The latest episode isn’t any different, and while this particular hard-leftist wasn’t screaming and cussing at Crowder, which often happens, she was having a hard time wrapping her head around a simple idea…

…she’s the racist one.

If you wish to see the interaction before this young woman’s, please see the link below. He is a Leftist but both him and Crowder found common ground and his mind was changed in a couple of areas. The latest “Change My Mind” focused on whether or not Voter ID laws were racist. Steven Crowder’s position is that they aren’t, the Left’s position is that they are and, per usual, Crowder offered the Left to try to change his mind in a civil exchange of ideas and viewpoints.

Civility was immediately thrown out the window, however, when a young woman sat down with a diatribe of virtue signaling over the pandemic, the vaccine, and more. It only became semi-heated when Crowder explained that statistically, Leftist white women are the few people who actually think voter ID laws are racist because Black people have difficulty obtaining IDs.

Crowder explained that the Black community, by and large, finds this point of view racist, because it’s the left effectively saying Black people are less capable of doing things than white people. Of course, she can’t be seen as being racist and immediately denied that Black people thought this was a racist concept and took offense to the fact she had been singled out.

The woman immediately denied that Black people thought this was a racist concept and took offense to the fact that Crowder had singled out white leftist women as the group who thinks this. Crowder, however, had the numbers and the girl attempted to mount a defense. Her data was incomplete and had been cherry-picked from a debunked Washington Post article.

Here’s how the conversation dialogue went down:

“Why do you think 73 percent [of black people] think you’re so wrong and that your point of view is racist?” asked Crowder.

“They don’t think my point of view-” she tried to say.

The girl floundered for a moment then quickly stopped, saying she’s not going to get into it.

The ignorance from this woman was sad but unsurprising. She indicated she had no idea that people could apply online for an ID and that knowing this information is valuable. She wondered aloud why this information wasn’t common knowledge.

Perhaps it wasn’t common knowledge for an uppity white liberal woman with apparently unlimited resources that Black people apparently don’t know or don’t know they have? Perhaps being confronted with her own racism will be opportunities for growth. To be fair, many of us don’t have to wonder why.

Since I am a Mug Club member, I believe it is necessary to share the numbers with you and that I’m not throwing them around arbitrarily. Further, Crowder’s site lined up the stats for you to see for yourself:

Majorities of whites (74%), blacks (73%), and other minorities (82%) say voters should be required to show photo identification before being allowed to vote. SOURCE: Rasmussen

87% of Black people have some form of confirmed photo ID. SOURCE: ProjectVote (pg. 3)

90% of Latin Americans have a form of confirmed photo ID. SOURCE: ProjectVote (pg. 3)

Percentage of Americans who have ID vs. percentage who vote. SOURCE: CNN

97% of registered voters in Georgia have a valid ID. SOURCE: AJC

Voter ID laws have been shown to actually INCREASE turnout in states that recommend them, such as Georgia and Indiana. SOURCES: Heritage, Heritage

Specifically in Georgia from 2004 to 2008, turnout increased

Compared to 8% of Whites

If you’d like to see the entire “Change My Mind” episode, you can watch it here.