Cryptocurrencies and digital assets have taken the investing world by storm over the last couple of months, as new “alt-coins” continuously break out to record highs. With investors of all profiles making large sums of money in the space, celebrities and “A-listers” around the globe have certainly taken notice. From Elon Musk to Snoop Dogg, Hollywood and corporate America appear to be catching the “crypto bug.”

Celebrities from all corners of entertainment have discovered an affinity for digital assets as the space grows by the day. Gary “Vee” Vaynerchuk, a social media mogul, has touted in recent weeks the opportunities for retail investors to make money through digital assets such as cryptocurrencies and NFTs. Another Hollywood star, Ashton Kutcher, has also used his platform in recent years to praise blockchain technology. Kutcher’s company, Sound Ventures, was an early investor in Ripple (XRP). 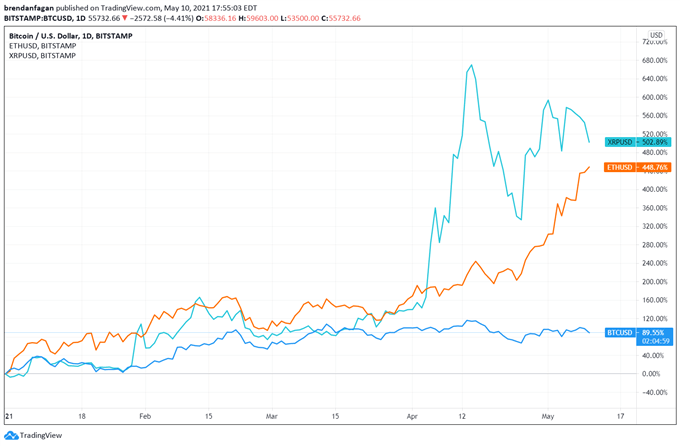 Despite all the attention Elon Musk brought to Saturday Night Live, investors were left disappointed as Dogecoin dropped by nearly 20% following Musk’s performance. However, Musk is not the only high-profile celebrity to tout the usefulness and practicality of crypto assets. From Guy Fieri to Lionel Messi to Mark Cuban, digital assets are moving mainstream and the globe’s biggest stars are embracing the revolution.

Jack Dorsey, founder and CEO of Twitter and Square, is a massive proponent of Bitcoin and digital assets. In October 2020, Square purchased 4,709 Bitcoins which totaled $50 million at the time of purchase. The company has also enabled its payment service, “Cash App” to support Bitcoin trading and payment. Dorsey has also taken his interests one step further by launching Square Crypto, which gives grants to top cryptocurrency developers.

Mark Cuban has recently tweeted about Dogecoin, saying that his Dallas Mavericks have started accepting Dogecoin and other cryptocurrencies as payment for season tickets. Cuban has also revealed that he has held various cryptocurrencies for years, and the billionaire has only added to his portfolio of digital assets. Jokingly, Cuban has floated the possibility of running for President should Bitcoin reach a value of $1 million.

While sentiment regarding cryptocurrencies is high among retail investors, the same sentiment is not being echoed by the SEC and federal regulators. In a television interview last week, SEC Chair Gary Gensler noted that investors need to be better protected when investing in crypto assets. Gensler also commented on the nature of crypto assets, saying that “a lot of crypto tokens … are indeed securities,” which would place those assets within the purview of the SEC.

In closing remarks, Gensler took aim at the impact of social media on financial and crypto markets, highlighting the impact that high-profile individuals can have on individual securities or assets.

On Monday, the Division of Investment Management at the SEC provided investors with a stark warning about Bitcoin. The SEC called Bitcoin a “highly speculative investment” and warned investors to use caution when…