Manager Zinedine Zidane has decided to leave Real Madrid and informed his players on Wednesday. (AS – in Spanish)

Gareth Bale’s agent says reports the 31-year-old Real Madrid and Wales forward – who spent this season on loan at Tottenham – plans to retire after Euro 2020 and try to become a professional golfer are “rubbish”. (Talksport)

Leicester could offer Schalke’s 21-year-old Turkey centre-back Ozan Kabak – who spent the second half of the season on loan at Liverpool – the chance to stay in the Premier League. (Mirror)

Liverpool have agreed a deal to sign French defender Ibrahima Konate, 22, from RB Leipzig on a five-year contract. (ESPN)

Liverpool’s hopes of signing Udinese’s 27-year-old Argentina midfielder Rodrigo de Paul have been boosted as AC Milan may no longer be interested in a deal. (Express)

Chelsea and Borussia Dortmund are in contact over possible deals for the Blues’ England striker Tammy Abraham, 23, and midfielder Callum Hudson-Odoi, 20. (90min)

West Ham may not be able to meet Chelsea’s asking price of £40m for Abraham. (TeamTalk)

Borussia Dortmund’s pursuit of Hudson-Odoi could pave the way for England forward Jadon Sancho, 21, to depart the Bundesliga club for Manchester United. (Mirror)

Brazil winger Raphinha, 24, says he is not thinking about leaving Leeds United, despite speculation linking him with Manchester United and Liverpool. (Metro)

Premier League clubs will have to wait until July before approaching Barcelona over a deal for 28-year-old Brazil forward Philippe Coutinho. Arsenal and Everton are thought to be interested. (Sky Sports)

English goalkeeper Sam Johnstone, 28, says his future is in West Brom’s hands despite being linked with a £20m move to Leeds or West Ham. (the i)

Manager Antonio Conte left Inter Milan as the club were prepared to sell 80m euro (£69m) worth of talent this summer to help their financial situation. (Guardian)

Wolves have told fans they do not need to worry about losing Portugal midfielder Ruben Neves, 24, this summer. (Mirror)

Real Madrid are undecided on whether to keep 22-year-old Norway midfielder Martin Odegaard, who spent the second half of the season on loan at Arsenal. (AS – in Spanish)

Germany defender Jerome Boateng, 32, is not interested in a move to the Major Soccer League when his Bayern Munich contract ends this summer as he wants to continue playing in Europe. (Goal)

Benfica are interested in signing former Italy keeper Gianluigi Buffon, 43, when his Juventus contract ends this summer. (A Bola via Mail) 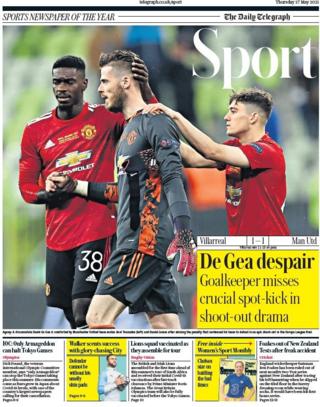 The front page of the Daily Telegraph sport section

Capmocracy - January 16, 2022 0
The Tampa Bay Buccaneers are one step closer to defending their Super Bowl title after dominating the Philadelphia Eagles 31-15 in Sunday’s wild-card...
Politics

More Than 200,000 Without Power as Winter Storm Slams the Southeast

Capmocracy - January 16, 2022 0
An estimated 230,000 customers are without power in the southeast as a winter storm pushed through the area on...
Opinion

Capmocracy - January 16, 2022 0
Critiquing the Biden White House is becoming less necessary as they continually demonstrate to the American people that they...