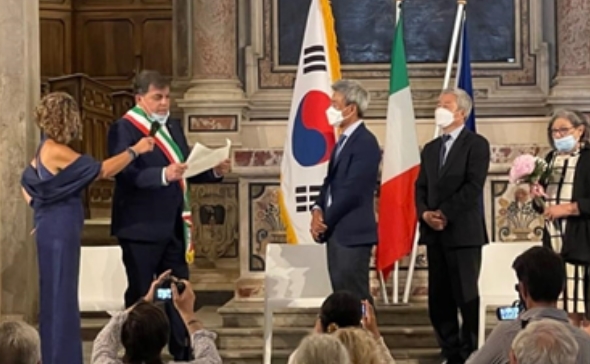 Italy-based sculptor Park Eun-sun has received honorary citizenship from Pietrasanta, a town in Tuscany, Italy, for his artistic contributions to the city famous for sculpture. Pietrasanta Mayor Alberto Stefano Giovannetti awarded the certificate to Park during a ceremony attended by Korean Ambassador to Italy Kwon Hee-Seog at the Church of Saint Augustine, local media outlet La Nazione reported. Park is known as the third foreign artist having received honorary citizenship from the Italian town. The two others are Colombian sculptor Fernando Botero and Polish sculptor Igor Mitoraj.